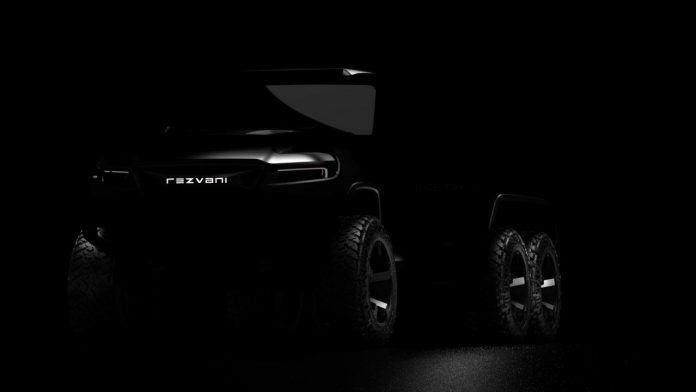 Ever think that the Rezvani Tank is a little, well, understated? Particularly in Military spec with its bulletproof and bombproof tech, a smokescreen dispenser and the 1,000bhp supercharged V8 from the Dodge Demon. How on earth would anyone know you’d popped round for a cup of tea?

Luckily, the Californian company has just the answer – a new six-wheeled pick-up truck called the Hercules 6×6. Give the naming department a raise. All of them.

We’ve only got teaser images for now, but Rezvani claims the Hercules will be “an antidote to the current dull truck segment” and that it’ll be its most capable vehicle to date. We don’t doubt that.

As with the Tank, the Hercules will feature a steel body on frame construction (most likely on the same Jeep platform, just with an extra axle) and a chunky suspension setup from the good folk at Fox. Plus, it’ll also be available as a Military Edition with the same bulletproof glass, body armour and safety systems as on the Tank. And by safety systems we mean features like EMP protection and electrified door handles. Blimey.

There’s no news on engines as yet, but if its SUV is anything to go by then expect to see V6s in both petrol and diesel flavours, as well as V8s with either 500bhp or the aforementioned 1,000bhp.

Oh, and the Tank comes in right-hand drive, just in case you were already thinking of importing a Hercules to Blighty. Hercules went to the underworld twice and even wrestled death too, so this should manage a muddy Shropshire lane with little trouble.

If you are thinking of it (and you should be) Rezvani says the 6×6 will make its full debut this summer and that buyers can already place a $266 refundable deposit. What isn’t clear is how much you’ll have left to pay after the deposit…

Truck market recovering, but not ‘out of the woods’ yet –...

Northern Italy is rattled by a 4.5-magnitude earthquake

Why this is a great time to buy a pickup truck