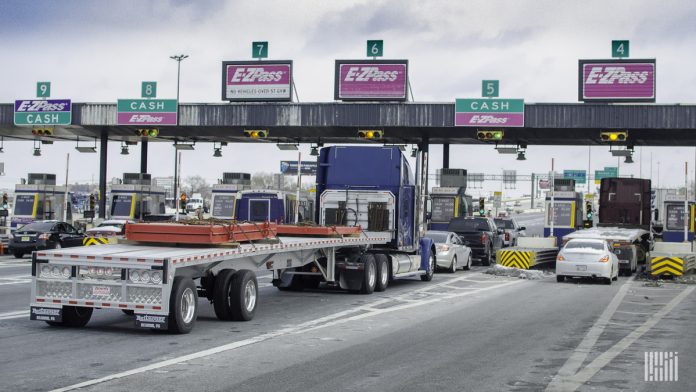 Rhode Island Federal District Court Judge William Smith said in his ruling that the decision was a “close call.”

The suit challenging the tolls was first brought by a group that included not only the ATA but gasoline retailer Cumberland Farms, M&M Transport Services and the now-defunct LTL carrier New England Motor Freight. The named defendant is Peter Alviti, director of the Rhode Island Department of Transportation, as well as the Rhode Island Turnpike and Bridge Authority. Earlier attempts by both sides to have the case ended through declarative judgments have failed.

The ATA and its co-plaintiffs were requesting a preliminary injunction to put aside the tolls during the road to a trial in the case.

The tolls that went into effect two years ago apply only to trucks. Personal vehicles like cars, SUVs or light trucks are exempt. Under the toll system implemented in Rhode Island, the daily maximum toll is $40, but going straight through the state on Interstate 95 is capped at $20. Also, a truck making a round trip over the same route only pays the toll once.

The judge’s decision mentions that six of the 12 planned tolling locations in the state were operating as of March.

What Judge Smith said was a “close call” was the question of whether the plaintiffs in the case were likely to prevail at trial and even more specifically whether the tolls are a violation of the interstate Commerce Clause of the Constitution. A finding that the ATA and others were likely to prevail at trial is one of the necessary steps for a preliminary injunction to be handed down.

The plaintiffs had argued several points about why they believed the tolls violated the Commerce Clause. They cited statements by various Rhode Island officials in the runup to the 2016 passage of the RhodeWorks legislation on the prospect of out-of-state truckers picking up a lot of the projected revenues from the tolls. The response of the state in the legal proceedings has been that the words of officials are “hearsay” and that what matters is what’s in the statute, which they say shows no discrimination against interstate commerce.

Smith agreed with the state. The law “enjoys a presumption of constitutionality” and it is “not clear” from the law’s wording that discriminantion against out-of-state truckers was planned, Judge Smith wrote. “Indeed, the text of the statute and legislative findings are silent with respect to any distinction between in-state and out-of-state commercial trucks.”

But there still will be a trial to sort all this out. “This holding in no way presages the final outcome of plaintiffs’ claim at trial,” and the ATA and the other plaintiffs “may well be able to show that the (tolls were) enacted with an intent to discriminate against interstate commerce,” Smith wrote.

A similar “let’s talk about it in the trial” approach was taken by Smith in the question of whether the caps, and the possibility they result in the equivalent of a flat fee, discriminated against out-of-state truckers.

“At trial, with the benefit of that evidence, the court will be better suited to determine whether the tolls operate in a similar manner” to unconstitutional fees,” Smith wrote. The judge also noted that the only data the ATA and its co-plaintiffs cited was a 2015 study that was taken before the tolls went into effect.

Dismissed driver’s lawsuit says he was fired for being gay

One man hurt after truck drives through large crowd in downtown...