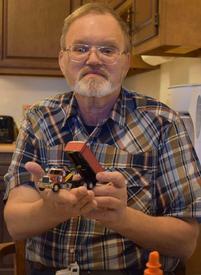 Richard Henry Dziurowitz passed away on Friday, April 24, 2020 at Des Peres Hospital in St. Louis. He was born on July 7, 1961 to Henry and Veronika (Haus) Dziurowitz, who were first generation immigrants from Germany.

Richard was a gifted artist whose talents as a sign-painter were in much demand before the age of digital graphics. His handiwork can still be found throughout Jersey and Calhoun County Counties in the form of signs for towns, businesses, churches, and mascots for schools. He was an avid collector of 1/64 scale toy tractors, trucks, and police cars. He had an exceptional ability to add realistic details to toys using simple materials he had on hand. Richard was a regular attendee of local and national toy shows and was personally acquainted with many of the vendors. He loved telling jokes and had a nick-name for just about everyone.

He was retired due to health problems, but was employed in various pursuits over the years, including as a farm hand and a tow truck driver. During that time, he enjoyed being acquainted with local police officers and sheriff’s deputies, and noting the details of their patrol cars.

He was a proud graduate of Jersey Community High School class of 1979, and loved attending class reunions. He was a devout Christian, and a faithful member of Eastland Baptist Church.

Richard is survived by sisters Betty (Steve) Gavaza of Godfrey, and Ann (Carl) Johnson of North Carolina; a brother Karl Dziurowitz of East Alton; many nieces and nephews, as well as close friends Pam and Clint Warford and their family.

He was preceded in death by his parents, brothers Dennis and Heinz Dziurowitz, and infant brothers Joseph, John, and Henry.

Cremation arrangements are entrusted to Alexander Funeral Home. Memorials may be made Eastland Baptist Church in care of the funeral home.

Due to Covid-19 virus restrictions, a private eulogy will be given by Pastor John Gibson of Eastland Baptist Church, and a memorial service honoring Richard will be held at a later date.