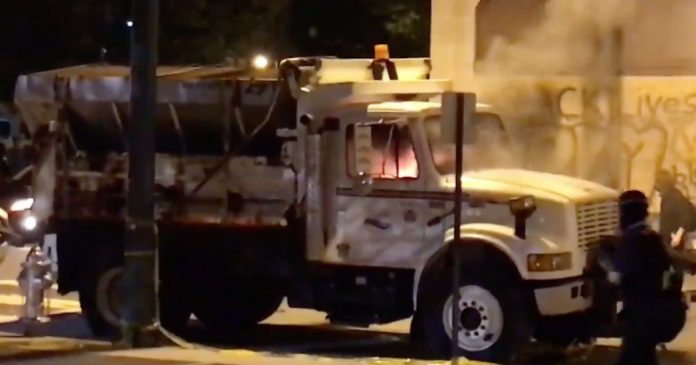 “An Unlawful Assembly has been declared at RPD Headquarters,” Richmond Police posted on Twitter just after 11:05 p.m. “Please disperse or face arrest.”

Rob Desir said someone in the crowd smashed out the windows of a city dump truck and set it on fire just before 11:20 p.m.

“Police have now released chemical agents to clear the area,” Desir wrote at 11:22 p.m. “One protester was taken into custody.”

Officers have to “secure the area before firefighters can respond,” the department posted at 11:23.

An alert was issued by Virginia Commonwealth University at 10:25 p.m. that there was a public assembly on East Broad Street impacting the MCV Campus.

That area was cleared by 10:40 p.m., according to the university, as the crowd amassed outside the police department’s headquarters.

“Police in full riot gear at RPD where the protesters appears to plan on heading,” Desir wrote at 11 p.m.. “Police have ordered them to disperse.”

Richmond Police posted that protesters were asked to disperse at 11 p.m. An unlawful assembly was called at 11:06 p.m.

Saturday’s demonstration comes nine weeks after George Floyd was killed in Minneapolis on May 25.

Since then the statue of Confederate Gen. Robert E. Lee on Richmond’s Monument Avenue had become a focal point for protesters against police brutality and racism in the wake of Floyd’s death.

Clashes between police and protesters gathered near the statue had become a regular occurrence.

This is a developing story, so anyone with more information can submit a news tip here. If you see breaking news, and can do so safely, shoot a photo or video and send it to CBS 6. You can also upload photos to our Facebook page or email pics@wtvr.com from your phone.

Watch Ford and Bosch’s garage where the cars park themselves