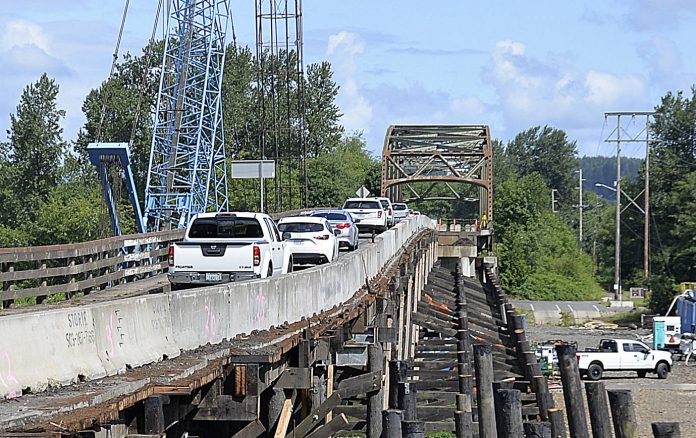 Work on three major state Department of Transportation projects in Grays Harbor County could resume as early as Monday.

The Department of Transportation “is working with contractors to restart project activities that fall under low-risk construction guidance as soon as next week,” said spokeswoman Christina Werner.

You can anticipate seeing contractor crews restart activity in the following work zones beginning the week of May 11.

Highway 101 at Cosi Hill: This slide-prone section of Highway near milepost 79, after years of temporary fixes, was in the process of getting a more permanent fix before construction was halted amid COVID-19 concerns. The hillside below the roadway is being shorn up with 575 6-foot shafts drilled 20-50 feet deep. The shafts are filled with quarry spalls — rock about 6-9 inches in diameter.

All told, more than 31,000 cubic yards of excavation and slide material will be removed from the site during construction, about 3,100 dump trucks full of dirt, clay, rock and other material. In total more than 19,500 feet — that’s 3.7 miles — of shafts will be drilled and filled with just under 29,000 tons of quarry spalls.

Rognlin’s is the contractor working the the nearly $10 million project. Work started June 17, 2019, and was expected to be completed in the fall of 2020.

One-way alternating traffic remains in place on a second slide that occurred in late January about 1,000 feet from the major project construction area at milepost 79.

“An emergency repair contract to repair the highway is underway,” said Werner. “Until the roadway can be addressed, one-way alternating traffic will remain in effect until further notice. A timeline for repairs has not been made available yet.”

State Route 107 Chehalis River Bridge: The 60-year-old bridge over the Chehalis just south of Montesano was in the midst of a major overhaul before construction was halted in March. The bridge was supported by about 200 timber pilings, and the pavement on the bridge was rutted and in constant need of patching with steady beach and log truck traffic.

In May 2019, construction on the $23.7 million project began. One-way traffic light-directed traffic funneled both directions to the western lane of the bridge as crews from Rognlin’s drilled 6- to 10-foot diameter holes, where steel shafts were inserted and filled with concrete to support the bridge as the timber pilings were removed. When construction is complete, last scheduled for late fall 2020, the 713-foot concrete structure will have 36 concrete girders, more than 2,600 linear feet of new railing, and a higher “portal curve,” the archway on the south end of the bridge, and a new roadway surface.

Downtown Hoquiam Highway 101 paving project: Before this project was halted in late March, crews from Rognlin’s were working on a large-scale sidewalk replacement and paving project on southbound 101 between Hoquiam and the west end of the Chehalis River Bridge at F Street in Aberdeen. Crews earlier this year had dug out and replaced stretches of sidewalk and ADA sidewalk ramps before construction was halted.

The City of Hoquiam has dedicated about $800,000 to replacing 80% of the sidewalks through downtown Hoquiam to Myrtle Street. This work, also done by Rognlin’s, is done in conjunction with the ADA ramp replacement that’s a required part of the Department of Transportation’s $5.6 million repaving project.

When work resumes, expect the single-lane closures you saw during the initial construction, which started in February. Pavement grinding and replacement will create more lane closures through this stretch of highway; the pavement work is heavily weather-dependent, but crews are still shooting for completion in the fall of this year.

The Brass Tap reopens and 5 other business updates in Round...

What will prove favorable for Heavy Truck Engine Brake Market? –...