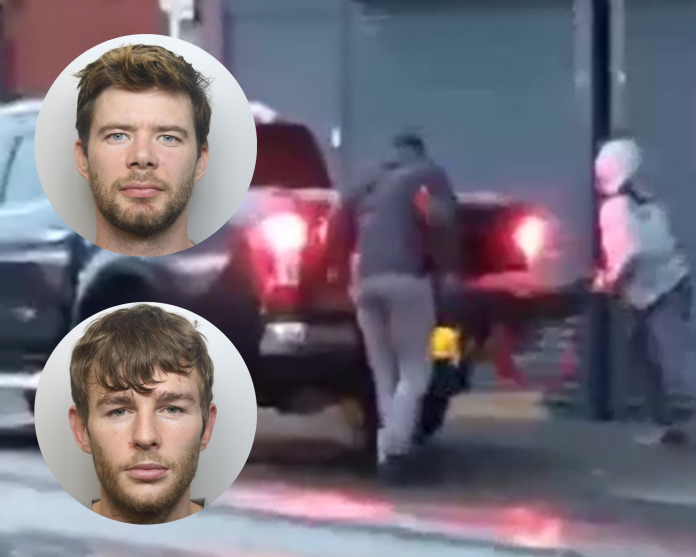 A PAIR of robbers who were found hiding in a resident’s garden after ram raiding a convenience store have been jailed.

Christopher Jones and Thomas Eden targeted a Co-op store in Warrington in a ‘planned, professional robbery’ before fleeing in a getaway car to Widnes, where they were located by the police helicopter.

Shocking video footage shared on social media and played in court showed a black pickup truck with a rope attached breaking into the cash machine in the shop’s entrance shortly after 9pm on Monday, June 15.

Two men were pictured entering the store, one wearing a grey hoodie with the hood up and the other in a black top being masked – with a third offender behind the wheel of the vehicle.

They were then seen driving away having stolen what was described as a ‘little box’, with a car linked to the incident later found abandoned on Ditton Road.

Jones and Eden, aged 31 and 26 respectively, admitted robbery at Liverpool Crown Court last month in connection with the incident.

The former also pleaded guilty to escaping from lawful custody.

Both defendants, from Liverpool, appeared back before the same court in order to be sentenced this afternoon, Wednesday.

And Jones was jailed for five years and eight months, with Eden handed 44 months behind bars.

Detective sergeant Tom Hall said: “Eden and Jones terrified two members of staff as they brazenly robbed the store in full view of the public, who were filming them in action.

“They had planned their attack by swapping vehicles after fleeing from the scene and then attempted to evade police by running through people’s gardens and hiding in bushes.

“I want to thank the public who came forward to provide information, the hard work of the officers who captured the suspects and the detectives investigating the case.

“It certainly played a part in the men admitting to their crimes and ensuring they were put behind bars.”

The court heard that Jones fled from HMP Thorn Cross on Christmas Eve last year, a day after being transferred from HMP Risley.

At the time, he was serving a 19-year sentence for a similar string of robberies across the north west – including one in which he was the passenger in a car which ran over a police officer.

The latest offence saw the defendants drive in convoy from Liverpool to Warrington in two stolen vehicles with fake number plates.

As shop staff were locking up, the defendants drove up to the premises ‘at speed’ in a Nissan Navara.

Jones, brandishing a crowbar and with a mask covering his face, ordered one employee to ‘get out of the way’.

The dad began to attack the cash machine with a crowbar, before attempting to break into the ATM with a sledgehammer he had been handed by a third offender – who has not yet been identified.

He then attached a rope to the tow bar of the truck and the cash machine, but only managed to steal a tray containing a small number of rejected bank notes and none of the remaining £26,230.

Meanwhile, Eden – who was previously jailed for seven years in 2009 for inflicting grievous bodily harm – acted as the getaway driver, with the Nissan switched for a Seat Ibiza which was parked up ready for the escape nearby.

The latter vehicle was later found ditched with a different set of number plates, but with the crowbar and an angle grinder inside.

Both Jones and Eden – who appeared in court via video link to HMP Altcourse – were arrested nearby after being spotted hiding in the garden of a bungalow on Halebank Road by the police helicopter.

In the meantime, Jones had called his girlfriend asking her to pick him up with a change of clothes.

She was arrested in the car park of the nearby Beehive Inn pub in connection with the incident, but was later released by Cheshire Police.

“Mr Jones, you were moved to HMP Thorn Cross before you had completed your jail sentence.

“The following day you walked out of the prison and remained unlawfully at large for a period of six months until you were arrested following the commission of this robbery.

“You attacked the ATM, having threatened staff as you made your way inside.

“It was a pretty inept attempt – all you got was the tray of discarded notes and not the £26,000 stored inside the machine.”

Following the sentencing, Cheshire police and crime commissioner David Keane added: “These two men shocked the local community as they attacked the cash machine in broad daylight in front of passers-by.

“I welcome the sentences handed to them, and I hope it sends a clear message to other offenders who look to come to Cheshire to commit crime – I also would like to praise those members of the community who provided information to the police and to the officers who worked hard to ensure the criminals were brought to justice.”

Are chrome grilles ‘designed to intimidate & kill pedestrians’? Liberals and...