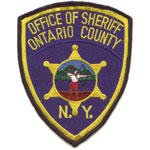 A Rochester Police lieutenant has died, the result of an accident involving a pickup truck and a bicycle in Canandaigua on Thursday night.

Ontario County deputies say that the RPD lieutenant, 44 year old Aaron Colletti of Canandaigua was on his bicycle traveling north on Woolhouse Road with a 17 year old who was also riding a bike, when the pickup truck driven by 70 year old James Miller of Canandaigua struck Colletti with the front right corner of his truck.

Colletti died at the scene from his injuries. The teenager was knocked off his bike also, but had minor injuries. The cause of the crash is still under investigation.

A statement from RPD says that Colletti is a 21-year veteran of the department, and is survived by his wife and four children.

On Twitter, Rochester Police Chief La’Ron Singletary said that “Last night we lost a member of our family. Lieutenant Aaron Colletti was a Father, a Husband, a Brother, a Man of Faith, and a Public Servant. May God Bless the Colletti Family & his RPD Family. May You Rest In Peace.”

The 4 best food trucks in Orlando

‘I Must Present a Compelling Case for Keeping the Item in...

The Real Story Behind The Jeep Comanche