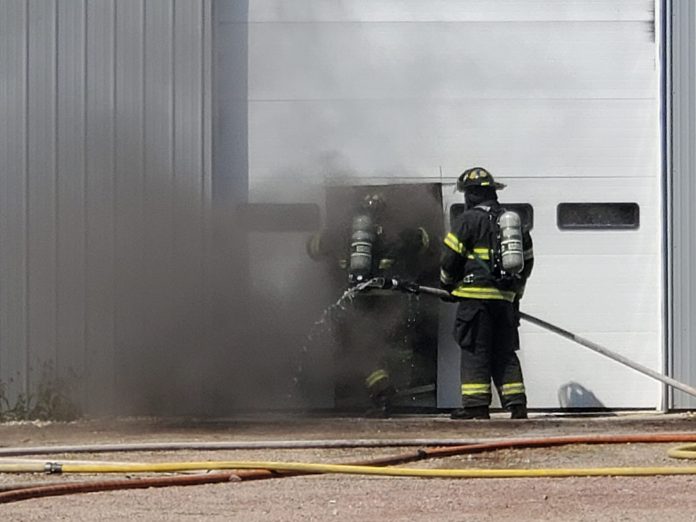 UPDATE:
Rock Rapids, Iowa — A truck shop and most of its contents were destroyed in a fire on Sunday, August 9, 2020, in Rock Rapids.

According to Rock Rapids Fire Chief Ed Reck, about 3:00 p.m., the Rock Rapids Fire Department was called to the report of a big grey building on fire between Rock River Vet Clinic and Pine Tree Storage on Highway 9. Reck says the building had been used as a truck shop years ago and was being used by the owners as a shop and for storage.

The chief says the fire department saw smoke coming from the roof vents as they approached the scene. He says they gained entry and then sprayed water to extinguish the fire. Some firefighters donned SCBA gear. Holes had to be torn for ventilation, and later the building had to be torn apart further to get to the fire, most of which was in the rafters of the building, according to Reck.

Reck says a couple of firefighters sustained scrapes and bumps while fighting the fire, but nothing too serious.

The fire department was assisted by the George Fire Department.

He says the cause of the fire is undetermined and is under investigation.

Chief Reck reports that the building was totaled. A camper stored inside was also totaled. However, Reck says they were able to save a classic car and an antique tractor that had also been stored in the building.

He says the firefighters who responded were on the scene for five hours.

Firefighters were paged to the scene a few minutes before 3:00 p.m. on Sunday. On fire was an industrial building between Rock River Vet Clinic and Pine Tree Storage, just east of the Rock River bridge on Highway 9.

Firefighters donned SCBA gear and cut holes in the building’s roof and a garage door to fight the fire.

We hope to bring you more details as they become available.