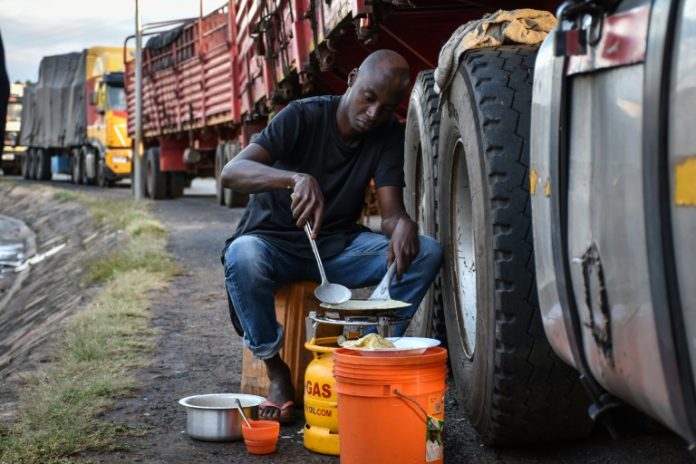 Every day hundreds of trucks fan out from East Africa’s main ports in Kenya and Tanzania carrying cargo to the landlocked hinterland, and fears are rising they are becoming a major vector for the coronavirus.

Their drivers gather at truckstops, weighbridges and customs points, socialising at lodges, restaurants and with sex workers who ply the busy routes linking the port cities of Mombasa and Dar es Salaam to Uganda, Rwanda, Burundi, the Democratic Republic of Congo and South Sudan.

With most East African countries under strict restrictions to curb the coronavirus, truck drivers are among the few allowed to circulate as they ferry essential goods across the region.

However, border testing has revealed a high number of cases among the drivers and alarm is growing over their potential to be superspreaders.

“It is clear… the remaining sources of the disease are the truck drivers within Uganda and the region,” Ugandan President Yoweri Museveni said earlier this month.

Uganda has carried out thousands of tests on truck drivers, with 51 — a mixture of Tanzanians and Kenyans — found to be carrying the virus. The country has a total of 122 recorded cases.

Rwanda has for three weeks said its case numbers — currently 285 — “reflect a rise in cases of cross-border truck drivers and their assistants”, without detailing how many have been infected.

Truck drivers have also tested positive in Kenya, South Sudan and the Democratic Republic of Congo.

Osborne Ndalo, a clinician in Mombasa with the North Star Alliance, which runs health clinics at truck stops, said one Kenyan driver who tested positive at the Ugandan border was found to have infected a lover at one stop in Kenya, as well as up to three others he interacted with along the road.

“What makes the drivers a risk group is mobility… They come into contact with people from different regions, from different backgrounds,” he told AFP.

Ndalo said he believes drivers are spreading the virus “much further, we don’t even know”, as testing is limited.

“An infected truck driver can infect a sex worker by mere contact, and the virus spreads not only among the drivers but the communities around too if they get in touch with contaminated surfaces.”

This pattern harks back to the spread of HIV/AIDS, which severely impacted truck drivers in the region.

“They need to be careful, they can spread it very far,” said Nicholas Mbugua, secretary general of the Kenya Long Distance Truck Drivers Association (KLDTDA), which is working hard to educate the drivers on handwashing and social distancing.

Kenya has now ordered drivers passing in either direction across the border to obtain a certificate proving they have tested negative for the virus, and undergo a nasal swab test every two weeks.

Museveni said stopping trucks from entering the country would be “suicidal” for Uganda, which like many of its neighbours has no access to the sea or rail transport for imports and exports.

The crisis has led to a panoply of new measures at borders across the region that are disrupting trade and leading to days-long queues and protests.

Uganda’s testing regime has seen truckers stuck in long queues at the border, sometimes for days.

“It’s too problematic, we have lots of traffic lasting up to three to four days,” said Hussein Juma, 43, from Mombasa, adding that truck drivers were also being stigmatised and called names such as “corona”.

Uganda has also banned drivers from pulling in at traditional stopover points, designating mandatory stops where they are registered and tested, and their vehicles disinfected.

The country is mulling implementing a relay system at the border where a driver would hand over to a Ugandan driver at the border.

Rwanda has already put the system in place, with all trucks offloaded and sanitised before being handed over to Rwandan truck drivers.

“Some of the truck drivers that come from our neighbouring countries don’t usually have protective gear and do not abide by the protection guidelines to self-isolate, wear a mask” and so on, Abdul Ndarubogoye, chairman of the Rwanda Truckers Association, told AFP.

Rwanda imports mainly through Tanzania — and to a lesser extent Kenya via Uganda — and its rules have irked Tanzanian drivers who have protested at the Rusumo border post, blocking their colleagues from Rwanda from entering the country.

“It’s like the East African countries are not trusting each other in the way each handles COVID-19,” said Tanzania Truck Owners Association board member Rahim Dossa.

Tanzania is seen as an outlier in the region over its handling of the crisis, coming under fire for concealing information on the number of cases and failing to take strict enough measures.

Trucks from Tanzania mostly transport cargo from the port of Dar es Salaam to Zambia, the DRC, or to Kenya where its tea is auctioned in Mombasa.

However the country is only checking the temperatures of drivers at the border.

This week Zambia shut its frontier with Tanzania after noting a high number of cases in its border town Nakonde.

“If one country is a weak link then we are not doing much with this fight against COVID-19,” said Ndalo, the Mombasa clinician.

MAKing It: A community lifeline