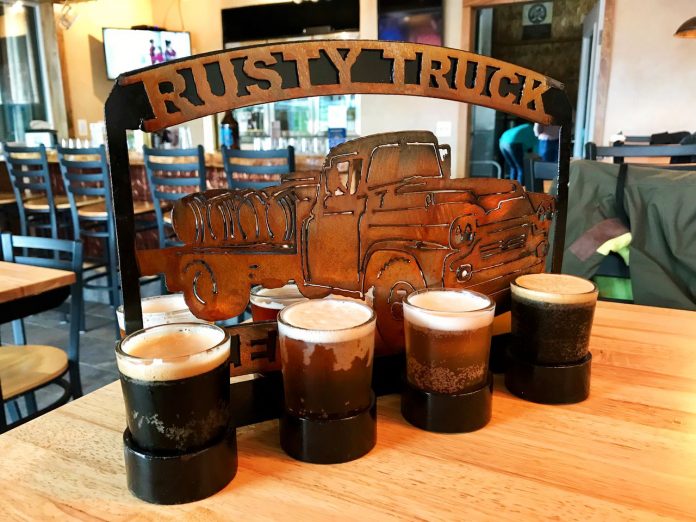 Brian Whitehead doesn’t want his beer to go bad. But he can’t sell it, so he’s choosing the only other option besides dumping it down the drain.

He’s giving it away.

The owner and founder of Rusty Truck Brewing this afternoon plans to fill up a couple of growlers’ worth of beer for anyone who wants some, the second time the Lincoln City brewpub has held such an offer in the past few weeks. The first time Rusty Truck delivered free beer in its signature antique beer trucks, but this giveaway will be at the taproom.

“We’re just going to be letting people come by the taproom, and we’ll have either a beer truck out there or other tapping equipment,” Whitehead said. “And people hopefully appropriately social distancing 6 feet will be in a line, and we’ll just fill up a couple growlers each for them.”

The limited shelf life of hoppier beers has left Whitehead little choice, he said. The brewpub, which closes for the season every winter, hadn’t yet reopened when the coronavirus prompted the closure of bars and restaurants across the state in mid-March. Both the restaurant and taproom remain closed, and to-go or delivery aren’t viable options.

“What happened was we just stopped selling beer,” Whitehead said. “So we have a lot of beer we made anticipating opening up in the spring and selling a lot of beer, and basically we don’t know what to do with it.

“I don’t like wasting stuff,” he said. “I was raised partially by a grandmother who grew up in The Depression and saved everything, and I think she’d roll over in the grave if I was dumping beer down the drain.”

Whitehead said with the two-growler limit, he doesn’t think nonlocals, potentially lured by nice weather and free beer, will head to the coast just to take him up on his offer. Gov. Kate Brown’s reopening plan frowns on that, by the way, and wants people to stay close to home.

“Last time they were mostly local people, and I don’t anticipate people making a 50-, 60-mile drive just to get a couple growlers of beer,” he said.

He says it’s also a chance to get face-to-face with some important people.

“We do want to thank the first responders, and the medical workers and the grocery store workers and all of our people that are keeping us going through this pandemic,” he said, “and of course it’s nice to be able to thank them in person when they come.”

Subscribe to Andre’s text service and get ongoing alerts about beer releases and news from the Portland and Oregon beer scene. And check out Andre’s beer reviews on Untappd, where he’s andremeunier13, and follow him on Instagram, where he’s @oregonianbeerguy.