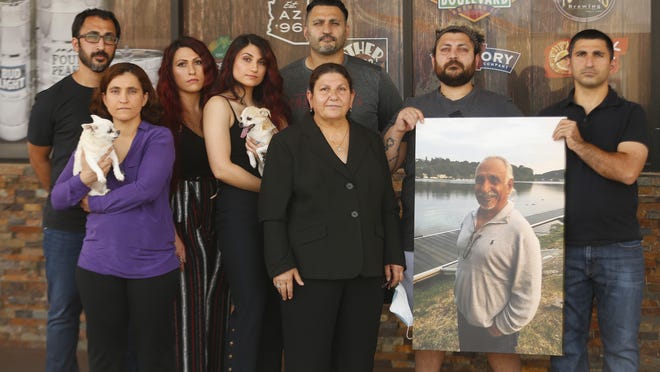 Salim “Sam” Hanna was a 10-foot-tall man in asmaller man’s body, his son Michael described. He wasn’t one to back down, even when he was face-to-face with four men trying to rob his liquor store, another son Mark added.

In 1994, Sam, a Chaldean immigrant from Iraq, opened Gilbert Convenient Mart, a shop that would later become known for its craft beer and hard-to-find spirits. He had a soft spot for dogs, having ten of them himself, and would tell customers he would rather see their dogs’ faces than theirs.

He was the kind of man who didn’t sugarcoat his opinions — if someone’s breath stank, he told them. His outspokenness sometimes led to public altercations, but also to respect, his family said.

“He was never afraid or scared of anything,” Michael Hanna said. “He spoke his truth. He was bigger than what he always was. It sounds like such a cliche thing to say. But my father, when people talk about David and Goliath, my dad was always the little guy fighting the bigger guy.”

In July, both Michael and Sam began showing symptoms of COVID-19.

After checking himself into Gilbert Mercy Medical Center, Sam died on Aug. 15, 2020, at the age of 72. His family held the funeral the following week, after memorial mass at Mar Abraham Chaldean Catholic Church in Scottsdale. He leaves behind his wife Noual and their seven children, as well as the dogs.

“My father was the kind of person if God wanted him to go, it was his time to go: ‘If it’s my time, it’s my time. I have no control,'” Michael said “That was the thing, at least for me, that made it a little easier. But it’s never easy.”

‘He was a big dreamer’

Sam grew up in Tel Keppe, an Assyrian town near Mosul. In the 1970s he moved to metro Detroit, where thousands of Chaldean residents have roots in Tel Keppe.

“If you want to talk about all the projects he wanted to get into, (expletive), this guy, since day one, since coming to the States, hustled,” Michael said. “He worked for someone for free just to prove he could handle any kind of job.”

He started as a butcher in Detroit, where after working for free as an apprentice, he threatened to leave if the butcher shop didn’t give him a full-time job and he got paid like everyone else.

In Detroit, he went by several names — Sam, Angelo as the Italian Americans called him, and Bob, because it’s the word for “father” in the Chaldean language and his children called him that. For years liquor store customers in Gilbert called him Bob not realizing his name was Salim or that he went by Sam, Michael said.

Later Sam moved on to a variety of other jobs, though the timeline remains fuzzy, Michael said. He took a job at a cousin’s supermarket, then opened his own convenience store. He purchased a truck, attached a snowplow, and would go plowing and salting parking lots with Noual.

At one point he opened Sam’s Family Produce. Michael recalled waking up at two in the morning with his brother Christopher to help load the truck with produce so Sam could deliver it to local mom-and-pop markets.

His father vowed that he would save up enough money to move the family to Arizona, Michael said. During a layover en route to California, Sam fell in love with the Grand Canyon State, where the dry, desert heat reminded him of the climate in Iraq, he said.

In 1994 Hanna made good on his word and moved the family to Gilbert, where he had purchased a former Circle K.

“I remember before sitting in the building as a kid, that piece of property, and he said I’m going to get it and build a strip mall,” Michael said. “We ended up building a restaurant.”

“He was a big dreamer. Sometimes he would dream so big it would take a very long time before one of them came true, but fortunately one of them did before he passed away.”

‘We tried to be so careful’:Navajo rancher and retired nurse dies from COVID-19

How the Hanna family became a part of the Gilbert community

Sam opened Gilbert Convenient Mart, also known as GCM Liquor, in Gilbert’s Heritage District. After a couple of years, he purchased a liquor license, and the shop steadily became known for its craft beer, premium whiskey and wine. The shop still keeps an ice cream freezer and aisle for groceries, mostly chips, juices and pantry food.

The neighborhood looks different than when the family first moved in.

“He was a businessman who wanted to invest in property and Gilbert, fortunately, he saw a lot of potential,” Michael said. “Back in those days, 1994, Gilbert was kind of a one-horse town. About a mile away from the shop there were cotton fields.”

“My father, when he first bought this store, we were always struggling. He threw everything at the dartboard. Some stuff would stick, some stuff wouldn’t.”

One idea that stuck for several years was a sandwich business that originally started at Michael’s middle school. Michael recalled being the new kid in town with few friends, and for the few friends he had, he would ask his parents to make them sandwiches.

His father persuaded him to start selling sandwiches to the rest of the school, so Michael began taking orders and collecting money in the morning. He would then leave on a “restroom break” during one of his class periods to call his parents and give them the sandwich orders, which his mother would drive over for lunch period.

“They were always a duo,” Michael said. “The downtown Gilbert community would know they would fight and bicker, but they loved each other and were always by each other’s side.”

The sandwich business quickly ballooned to the point where Michael was selling around 150 sandwiches a day and after school, his classmates were asking their parents to go to the convenience store for sandwiches. Eventually, the principal asked him to stop because it was taking money away from the cafeteria, Michael recalled. So they struck a deal and agreed that Michael could sell sandwich platters to the teachers and faculty instead.

“I tried to hustle this principal of mine because my father hustled,” Michael said. “I saw what my dad does to communicate, and I thought, ‘Let me try this with the principal.’”

‘He always had this passion, never stopping’

The sandwich venture was only one of Sam’s side projects.

His son Mark Hanna recalled that when food trucks rose in popularity, Sam and Noual started a food truck selling pitas and Mediterranean food. They sold it for a profit after about a year.

At one point Sam purchased property in Queen Creek and a 1940s Ford tractor. He wanted to start a small farm, growing an Iraqi variety of cantaloupe. He already had a green thumb, growing dates and vegetables in the family garden, and roped Michael into learning to farm. But they stopped after one season because too many cantaloupes had grown for the family to handle, Michael remembered.

“Even before he passed, he was working on projects with my cousins,” Mark said. “His whole life was just to build and expand. He always had this passion, never stopping. I think a lot of it came because he came from nothing, so he wanted to show and prove that he could make it.”

In 2018, Sam and his sons opened Hundred North Bar & Kitchen, a tavern-style restaurant that specializes in whiskey. The restaurant, which sits on the same block as the bottle shop, fulfilled his long-standing desire to expand his business on that strip of Gilbert Road.

After his funeral, his family held a small memorial service at Hundred North.

Mark believes that if their father could have one more healthy day, he would want a large sit-down meal with the whole family, hopefully without any arguments. His parents cooked together all the time, Mark said, so perhaps they would make one of his favorites, kibbeh pie stuffed with minced meat and onions.

“For him, he was always the most excited and most proud and happy when everybody was together,” Mark said. “I think if there was a final moment, that would be it.”