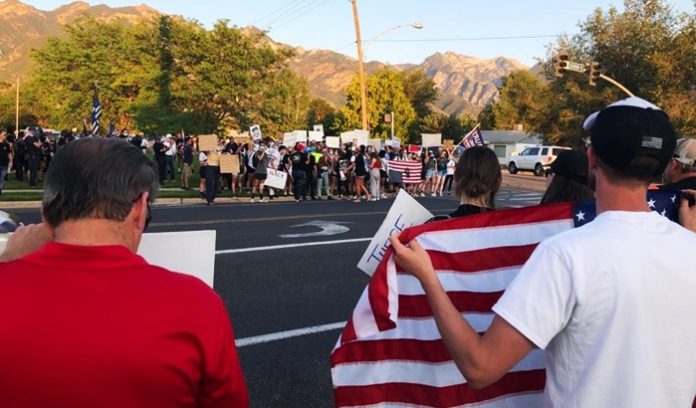 Sim Gill’s office received screening packets for eight individuals from Cottonwood Heights Police Department alleged of wrongdoing during the Aug. 2 incident, according to a news release.

“We reviewed all the evidence available and filed charges against three individuals and declined to file charges against five individuals,” the DA’s news release said. “We further reviewed a complaint from Councilwoman Tali Bruce alleging an assault by a CHPD officer. Based on the evidence presented and gathered by our office we concluded that criminal charges are not warranted.”

The news release added: “During our review we also noticed conduct of an individual officer that the screening team found concerning and further looked to see if any laws were violated. There was not sufficient evidence to warrant criminal charges once reviewed in the context of the surrounding interactions.”

The probable cause statements from the 3rd District Court of Salt Lake County for the three individuals that will face charges were also provided by Gill’s office.

The statement for all three men said that on Aug. 2, Lt. Dan Bartlett with the Cottonwood Heights Police Department observed a rally in Mill Hollow Park in Salt Lake County.

“A large crowd of people gathered at the pavilion in the park for the rally,” the statement said. “At one point, Lt. Bartlett observed a large truck pull into the parking lot of the park. The driver of the truck began to exchange words with the people attending the rally. Lt. Bartlett watched several rally attendees throw objects at the truck.”

When the rally finished, the attendees left the pavilion and gathered on Mill Hollow
Drive, the statement said. There were between 100 and 150 people congregating as well as four vehicles. One of the vehicles was a pickup truck, the statement said; a man standing in the bed of the truck had a loudspeaker which he was using to address the crowd and play music. Bartlett watched the man standing in the back of the truck use his loudspeaker to address residents directly who came out of their homes along Mill Hollow Drive while the crowd marched down the center of the street.

“There were two men marching at the end of the crowd that wore open carry pistols on their hips,” the statement said. “As vehicles approached the crowd, these two men would turn around, stare down the vehicle, and would not allow it to pass.”

The statement said that additional officers with CHPD responded to the area. The officers were instructed to get the people marching on the roadway to move to the sidewalks to allow residential traffic to pass through. According to Bartlett, most people moved to the sidewalks; however, some of the crowd refused to leave the roadway.

Bartlett advised responding officers to provide warnings to everyone marching that they
could continue their march on the sidewalks, but those that stayed on the roadway would be arrested, the statement said.

“Pecoraro refused to move to the sidewalk and was still blocking the roadway,” the statement said. “An officer attempted to take Pecoraro into custody, but he immediately tried to run. The officer tried to grab Pecoraro’s arm, but he violently pulled his arm away, yelling ‘no’ and ‘don’t touch me.’ As the officer attempted to get Pecoraro’s hands behind his back to place him in restraints, Pecoraro rotated his body while grabbing onto the officer and threw the officer to the pavement. The officer injured both elbows as his elbows hit the pavement and curbing of the roadway.”

“Pecoraro was able to rotate out from underneath the officer and get to his feet,” the statement said. “The officer did not attempt to pursue Pecoraro because the large crowd around him was growing more hostile. The officer realized that several pieces of his police equipment were on the roadway, including his department issued body worn camera and at least one spare pistol magazine containing ammunition.”

Knab was able to pull away but later the officer spotted him among the crowd and tackled him to the ground and placed him in handcuffs, the statement said.

“Video taken by a neighbor in the area captured Knab’s arrest and captured Andrew Carter slinging liquid from a bottle at the officers arresting Knab,” the statement said. “Two officers attempted to take Carter into custody for interfering with Knab’s arrest.”

Carter started throwing punches and then tried to flee, the statement said, but officers were able to take him into custody.

“After Carter and Knab were arrested, an officer spotted Pecoraro in a group of people standing in the roadway,” the statement said. “The officer came up behind Pecoraro and grabbed him to take him into custody. Pecoraro again resisted the officer’s efforts to place him in restraints. Pecoraro spun around towards the officer, squaring off his shoulder, lowering his center of gravity and widening his stance. The officer grabbed hold of Pecoraro’s T-shirt and began pulling Pecoraro towards the ground.”

Another officer was able to pull Pecoraro off the officer who was in a choke hold, but Pecoraro started to bite the latter officer’s right arm, the statement said, and was eventually put into handcuffs. The injured officer needed to be evaluated by Unified Fire Authority for injuries he sustained during his arrest of Pecoraro, as he was bleeding from his nose, had a bruise on his forehead, multiple abrasions on his arms and he felt pain in his throat, the statement said.

“These charges are based on the evidence we have reviewed and are subject to change if new evidence comes to light,” the news release said. “If anyone has evidence that you believe could be helpful, please email it to [email protected] with the subject line COTTONWOOD HEIGHTS.”

The Gear That Photographer John Kingston Can’t Live Without • Gear...