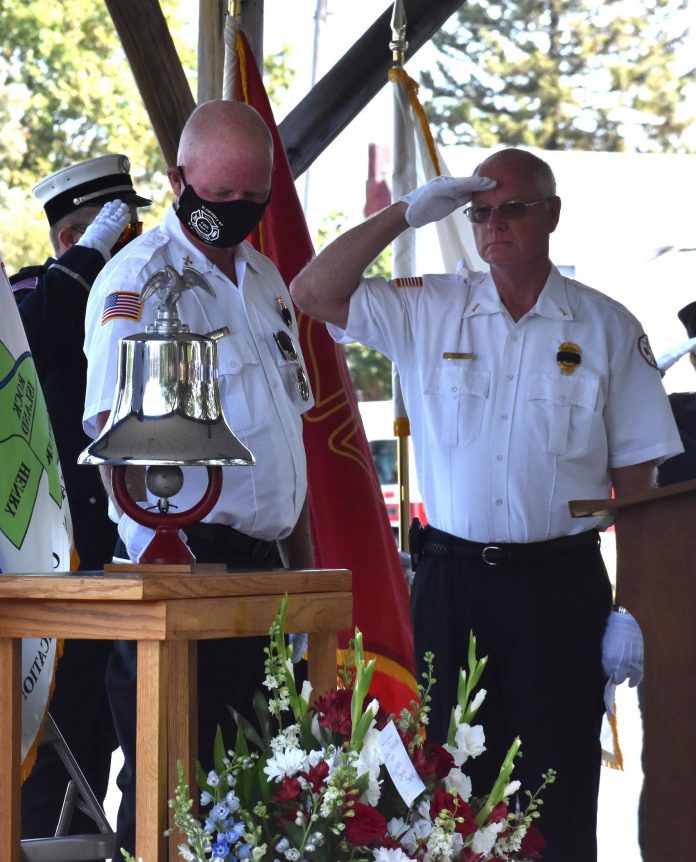 Orion Fire Chief Doug Smutzer held the pager to the microphone in the lakeside shelter at Andover Lake Park. The end-of-watch call for Osco-Andover Fire Chief Roger Stancliff came through loud and clear.

The echo of the county dispatcher faded.

Stancliff served with the Osco-Andover fire department for 32 years, and as its chief for 26 of those years. He was president of State Bank of Osco when he joined in 1988.

Assistant Fire Chief Mike Mielke, who joined the deparment three years before Stancliff, admitted to some amusement at the thought of a bank president in a business suit responding to calls.

Stancliff showed his commitment to getting the best equipment for the Osco-Andover firefighters, Mielke said. Each fire truck was designed and equipped for the specific needs of the department. Stancliff spent the last few months of his life writing grants and securing funding for gear that needed to be replaced.

Mielke said he learned from watching Stancliff that “courage is fear under control.”

Stancliff’s other qualities included dignity, wisdom and strength, as well as the integrity and honor he showed as a leader, Mielke said.

Patterson organized Osco-Andover firefighters to serve as an honor guard, and as a wagon and urn team bearing firefighters’ tools, the folded American flag and an urn with Stancliff’s ashes. A gear team carried the chief’s helmet, turnout coat, turnout pants and boots to the lakeside shelter and placed them besides his picture.

Bagpiper Derek Grant led the honor guard, the wagon and urn team, and the gear time from the picnic shelter to the lakeside shelter. Pianist Lynne Haars played hymns.

The Rev. Tim Doty, pastor of First Presbyterian Church, described Stancliff as “a servant of others in the name of Jesus Christ.”

Doty admitted being startled one Sunday when Stancliff told him, “We’re going to burn down a house tomorrow.” It was for training purposes, of course.”

First Presbyterian’s former pastor, Ryan Landino, said Stancliff was “kind, wise, grounded, and always brought joy into every space he was in.”

Stancliff’s daughter, Mary Essman of Rock Island, said her father’s generous spirit led him to jump in to help anyone in distress with “an ear to listen, a shoulder to cry on and a few extra dollars to pay that month’s bills. He even offered a room in our home.”

He taught his children that whatever they did, they needed to do it right. Patterson assured Stancliff’s family that their tears soon would turn to “tears of happiness that he walked among us.”