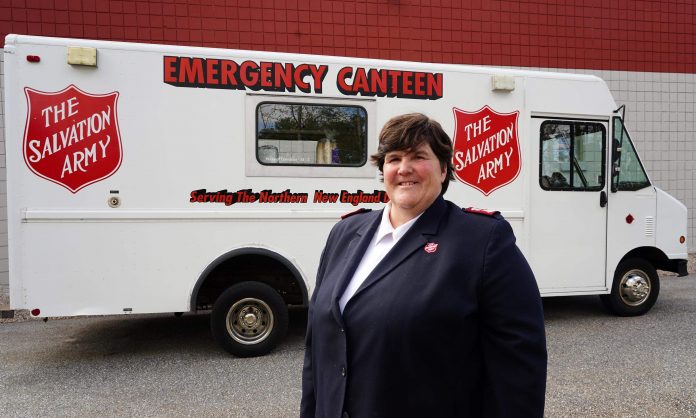 PORTSMOUTH – For the first time, in its long history of serving meals to the needy, the Salvation Army will now be serving from a food truck.

Major DonnaMarie Reed said the canteen truck is scheduled to begin serving to-go meals Tuesday night from a State Street parking spot the city designated for food trucks. The last vendor to use the space, Clyde’s Cupcakes, agreed in 2015 to pay $7,000 to lease the space for six months, but Reed said the city waived the fee for her charitable organization.

The City Council on Monday night voted unanimously to authorize City Manager Karen Conard to enter into an agreement with Salvation Army for a downtown parking spot for its meals ministry. Health Agent Kim McNamara noted meals distribution from the truck will also provide an opportunity for distribution of face masks to prevent the spread of coronavirus.

The follow day, Reed had a deal with the city to use the space for no cost for a month, with an option to maybe stay longer. Reed said she was informed that if someone wants to rent the space for a food truck, the Salvation Army agreement will be revisited.

The truck was provided by the Salvation Army, bears its red logo and was initially provided to assist with meals at emergency scenes, Reed said. It has dual windows, she noted, allowing service from both sides.

Inside there are dual burners, a refrigerator, a grill top and a generator. Meals will be served hot and to-go while social distancing mandates are in place.

On Wednesday, breakfast, lunch and dinner will be served, but that will likely change to breakfast and dinners seven days a week, said Reed. The Salvation Army is also in contact with Seacoast Mask Makers to distribute handmade masks.

SEACOAST CORONAVIRUS NEWS IS FREE: This content is being provided for free as a public service to our readers. Sign up for our free daily or breaking email newsletters and Seacoast Health newsletter to stay informed. Please support local journalism by subscribing to Seacoastonline.com or by subscribing to Fosters.com.

Also new for the Salvation Army is a rented space for its headquarters at 115 Heritage Ave. Reed said they’ll apply for a variance for a place of assembly for religious services, but will also prepare meals there, host a food pantry, as well as programming for children and adults.

“Everything we did at 15 Middle Street,” Reed said about the downtown building Salvation Army sold to restaurateur Jay McSharry, who plans to convert it to a 15-room inn.

Salvation Army signed a six-month lease for the Heritage Avenue location while it continues to look for a long-term home. Reed said it’s near a couple of bus stops, “so it’s still accessible.”

“Our biggest thing is to be able to serve people,” Reed said.

She said Salvation Army serves meals seven days a week, an average of 50 people are served meals daily and the number is growing to include people from the restaurant industry who became unemployed when businesses closed due to the Covid-19 pandemic.

Salvation Army had planned to move operations to a 2222 Lafayette Road strip mall, but the deal fell through.

Woodlands officials: PPE should not be put in recycling bin

Trail of damage lead to truck that hit family home