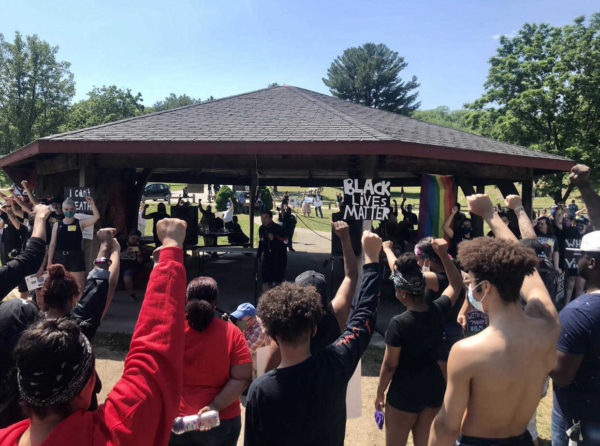 Protesters outside of a gazebo at Gowen Park in Sanford, Maine on June 6, 2020 during a protest against racism and police brutality.

SANFORD, Maine — Hundreds of protesters battled rain, racist provocateurs and anxiety around a city-imposed curfew on Saturday as they marched from a public park to the police station to protest national police violence and demand racial equity.

The protest was the first the southern Maine city has seen since national Black Lives Matter rallies were sparked by the May 25 killing of George Floyd, a black man, at the hands of a white Minneapolis police officer, who held his knee to Floyd’s neck for more than eight minutes. Portland saw its largest protest yet on Friday, with 2,000 people rallying for eight hours.

Supporters gathered in Gowen Memorial Park listening to speeches from people of color in the Sanford area, who told stories of discrimination, demanded a higher share of black teachers and police and voiced a need for new sets of policies that will make their communities safer.

A truck driver gives a thumbs up to people protesting racism and police brutality in Sanford, Maine.

The day was expected to be tense. Sanford imposed a Saturday curfew from 10 p.m. to 5 a.m., as threats from counterprotesters circulated on social media. One business owner posted that he was looking to hire private “military-trained people” to defend his business.

Ian Poyant, a 20-year-old resident of nearby Acton, listened toward the edge of the Gowen Park crowd.

“I’ve seen a lot of stuff on social media over the past week and a half about standing up for the black community and coming here today has just opened my eyes all the more,” said Poyant, who is white.

Ian Poyant, standing with his mother Ginny Howe, holds up a sign during a protest against racism and police brutality in Sanford, Maine.

Protesters encountered little opposition as they marched on Main Street for more than a mile to the police station. Chants filled the air as the driver of a large white truck bearing a Harley Davidson decal, idling in a traffic jam caused by the march, shot his arm out the window at them, hoisting his thumb high in the air in support.

Other Sanford residents sat on their porches watching them pass, some supportive, others expressionless. Four men sat on the back of a truck bearing a Confederate flag in a nearby lot.

The protesters collected at the police station, where three dozen officers stood waiting for them in a line. They told the officers, all of whom were white, that they wanted more racial equity in local police squads, then performed a die-in, laying face down on the concrete for ten minutes.

Protesters march down Main Street in Sanford, Maine on June 6, 2020 during a protest against racism and police brutality.

“This is a peaceful protest,” one protester told the others through a megaphone. “We are not here to antagonize the cops. We are here to articulate our demands.”

A provocateur, a man on a BMX bicycle, followed alongside the protest, shouting racist phrases at the group. He appeared again outside the station, taunting them and delighting when he provoked a response. As many shouted at him, a white protester threw water on the man.

This prompted Sanford police to pull the bicyclist away from the group, checking him for weapons and questioning him, allowing protesters to freely make their way back to Main Street, where they began their march back to the park. Minutes later, the man again taunted protesters with the same racist epithet.

Some protesters confronted him again in the parking lot of a gas station, briefly causing a tense standoff, before others in the rally — including Ryan Peters of Wells, best known as the rapper Spose — stepped between the provocateur and the black youth he was taunting. As they backed him away, Peters tried to convince the group not to respond.

“Next time that guy comes around, just ignore him,” Peters said before rejoining a chant.