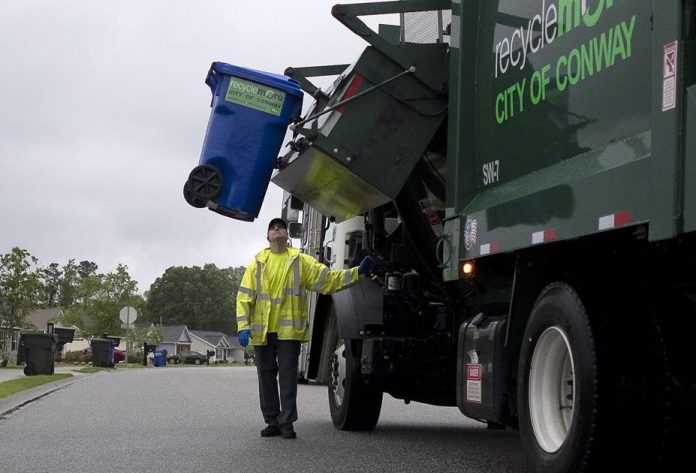 When Conway officials began their COVID-19 response, they separated the garbage collection staff.

They put half of the department in one location and kept half in another area.

Crews were told not to congregate in the break room and to maintain social distancing. Recycling and trash trucks could carry no more than two workers at a time.

“The first day, when all of this really started to hit the fan down here, they issued out rubber gloves …  they’re heavier than normal gloves,” said Theodore Probst Jr., who works on a city recycling truck.  “And they said that’s the only ones we were allowed to wear. … Because we’re handling a lot of different things daily.”

Garbage collection was an early concern for city leaders. Although crews don’t often come in contact with residents, they never know what lies on the materials that wind up in trash cans and recycling bins.

City officials have asked residents who are quarantined because of possible exposure and those who have tested positive for COVID-19 not to recycle. They’ve also asked that all trash be bagged before it’s placed in cans.

But there are still concerns. Crews handle cardboard and recyclables are not bagged.

For the most part, though, he feels safe.  Along with the heavy-duty gloves, crews have hand sanitizer, Clorox wipes for wiping down the trucks after each shift, safety glasses and even medical-grade masks if they need them.

Originally from New York, Probst hasn’t worked for the city long. Although he’s owned a house in the area for 13 years, he just moved here permanently last year. A machinist by trade, he was semi-retired and looking for a stable job with benefits.

That’s why he took the position with the city. He said he’s met other folks in the department like him, transplants from the North who still want to work but prefer living here.

“Most of the guys are pretty regular guys,” he said.

As he’s followed the news about COVID-19 hotspots in the U.S., he’s been concerned for the family he has who still live in New York and Connecticut.

He knows Conway has contingency plans if the situation worsens here, and he’s been pleased with how seriously city officials have taken the situation.

“The city’s been pretty on top of this,” he said.

This is just one of 10 stories focusing on people who are still working during the COVID-19 pandemic. Browse more stories by clicking below.

They don’t work on the front lines — not, at least, in the sense that doctors, nurses and paramedics do.

Trends in Manufacturing Innovation in Pickup Truck Market – The News...