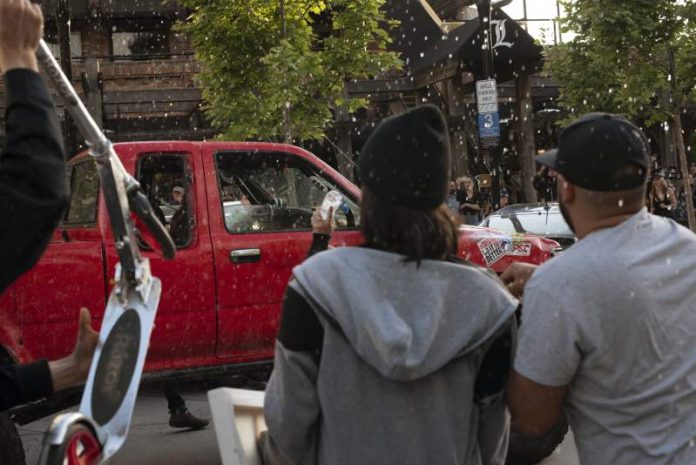 A pickup truck driver filmed driving through demonstrators gathered near Old Courthouse Square in Santa Rosa on Saturday evening appears to be a Montgomery High School student based on public statements made by school authorities and police.

The incident, captured on video by bystanders and the city’s own live feed of Old Courthouse Square, occurred toward the end of a peaceful daytime protest following the death this week of George Floyd while in police custody.

The driver is a minor and was released to his parents after being interviewed, and the truck was impounded, Kucker said in an email.

“He denied trying to run-down any protesters, but indicated that he wanted to fly an American flag past the crowd,” Kucker said. “Due to the fact that no victims came forward, the driver was released pending further investigation.”

No arrest was made and no injuries were reported.

Montgomery High School officials, in an email to the school community on Sunday, said administrators had learned of “an incident in which a Montgomery High student was seen and recorded on video driving a vehicle during a protest in downtown Santa Rosa yesterday. The video has been widely shared on social media.”

The videos show a red Toyota pickup truck maneuvering through the intersection of Mendocino and Fourth avenues on the north side of the square and through a crowd of protesters, prompting dozens to chase the pickup on foot as it circled the square, an American flag flapping from its place in the truck bed.

The truck encountered traffic just before it was able to complete its lap, and several protesters caught up to it near the northwest corner of the square. One person appeared to try to climb into the bed of the truck before falling off, another held onto the driver’s window but fell as the truck cleared traffic and sped away, video showed.

Other demonstrators lobbed objects at the vehicle, including a folding scooter that landed in the bed of the truck, according to video posted to social media.

In a separate statement, the Santa Rosa Police Department asked anyone who was a victim of violence during the unrest to inform police by calling (707) 528-5222.

The principal of Montgomery High School, Randy Burbank, said that school administrators are aware of the incident and that while the incident is not under the jurisdiction of the schools or the Santa Rosa City Schools district, administrators would support the police department’s investigation.

You can reach Staff Writer Will Schmitt at 707-521-5207 or will.schmitt@pressdemocrat.com. On Twitter @wsreports.