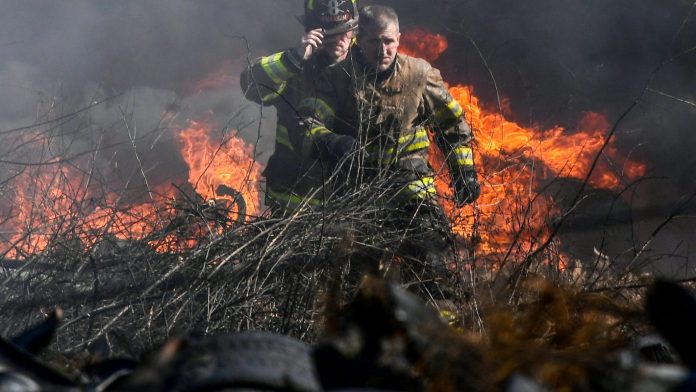 Some of the names are written in small, cropped print, others in swooping cursive. A few are flanked by hearts, and some accompanied by short notes scrawled in permanent marker.

Each name written on the Berea Fire Department’s pink truck is different, and each one has its story.

“Stories of hope and courage,” they’re called by Assistant Fire Chief Alan Myers, whose own name appears a few feet above the truck’s pump discharges.

The signatures are a part of the department’s On Fire for a Cure Initiative, and each represents another person’s fight against cancer. While the names spanning the sides of the truck are written by hand, the dozens on its cab are printed in bold, uniform letters, a different colored ribbon by each one.

That space is for current and retired members of the Berea Fire Department and their direct family.

Some are cancer-free now, some are still fighting. Others were taken by the disease.

Myers’ name is next to a ribbon of periwinkle blue for stomach cancer.

In all, there are about 46 names for a roughly 40-person department. When he first volunteered with the department more than three decades ago, Myers thought he knew the risks; burning buildings, smoke, falling structures.

But it was only recently he and other firefighter began to recognize a danger that, on call after call, creeps in through the spaces of their turnout gear and takes root in the pores of their skin. A danger that lingers on in their lungs long after the smoke has cleared.

According to the International Association of Firefighters, job-related cancer kills more firefighters than all other on-duty causes, combined. At the association’s Fallen Fire Fighter Memorial Wall of Honor in Colorado, 65 percent of the people added between 2002 and 2018 died fro occupational cancer. The data linking fire fighting to cancer — along with the death rate of first responders in the 9/11 terrorist attacks — have compelled states to expand benefits for firefighters battling the disease.

Yet South Carolina is one of just two states that have not passed laws supporting some form of firefighter cancer protections.

A bill, filed in February by state Sen. Thomas Alexander, R-Oconee, would change that, creating an insurance fund for all qualifying professional and volunteer firefighters to help pay for cancer treatment and provide benefits for their families if they die.

The bill would be an important step in acknowledging a deadly and long-neglected problem in the fire service, Myers said.

It took months after Myers’ 2017 diagnosis for him to make the connection between his illness and his career.

The 35-year Berea Fire veteran went to his doctor complaining of a loss of appetite and bad heartburn and learned he had stage 3 stomach cancer. Shortly after the diagnosis, a surgeon removed the tumors in his gut, along with his gallbladder, bile duct, part of his pancreas, and a section of his small intestine.

He spent the next month in the hospital on a feeding tube.

‘The studies weren’t there’

After Myers was discharged, he read a series of studies linking his profession to increased risk of cancer. Among them was a National Institute for Occupational Safety and Health study that looked at 30,000 firefighters in the U.S.

It found firefighters are twice as likely as anyone else to develop testicular cancer and mesothelioma. They’re 53% more likely to be diagnosed with multiple myeloma and 51% greater chance to suffer from non-Hodgkins lymphoma.

As Myers read the numbers, he thought back to the blazes he fought over the years.

When he started at the department, a dirty set of turnout gear was a badge of honor; a sign that its owner was battle-tested. He couldn’t help but think of all the carcinogens contained in the ash and soot that caked those suits as they hung in the station, and what it meant when they put them back on.

And through the years, Myers and his fellow firefighters would stay in their unwashed gear after calls and eat immediately after clearing a scene without properly decontaminating.

“It’s not that we were being reckless, it’s just the way it was,” he said. “The studies weren’t there.”

As more information has come out linking cancer to firefighting, departments across the state and country have started implementing strict decontamination procedures and health guidelines.

At the Berea Fire Department, some of those changes include decontamination at the scene of a fire after exposure, a washing machine that meets advanced cleaning standards, and the regular use of decontamination wipes.

The measures reduce the health risks for firefighters but don’t eliminate them.

Although departments are responding to the threat, the state has been slow to act, according to Justin Lenker, president of the Midway Professional Firefighter Association.

“I’ve lost a lot of friends to cancer,” he said. “I think this is something that South Carolina needs.”

‘A price worth paying’

Alexander’s bill would set aside $3.5 million a year for an insurance fund. Qualifying firefighters would receive:

“It’s a price that’s worth paying to help our firefighters through these unfortunate situations,” Alexander said.

The policy would extend to active firefighters who have worked in the state for at least five years, and to retired firefighters up to 10 years after they left the field.

If a firefighter dies of cancer, the legislation would classify it as a line-of-duty death, expanding benefits for their families, a change Lillian Carney said would have given her late husband some peace of mind in the last days of his life.

Josh Carney was a battalion chief with Midway Fire and Rescue on Pawley’s Island, SC, where he served for about 18 years. In 2017, he noticed what looked like a pimple or ingrown hair on the back of his head, but didn’t think much of it.

As the months went by, more began to appear, and he finally decided to go to the doctor.

Multiple PET scans found too many tumors in his head, neck and torso to count. His official diagnosis was stage 4 skin cancer, Lillian Carney said, but the tumors had spread so much it was impossible to tell exactly where it originated.

He died within four months of the diagnosis.

“It was a very quick treatment plan and battle with cancer that we had,” she said.

Because he died so soon after his diagnosis, Lillian Carney said they were able to pay for his out-of-pocket medical bills with their savings. But if the treatment had lasted much longer, she’s not sure what they would have done.

“It’s one of those Catch-22s,” she said. “We would not have had enough money in the savings account had he made it to a new cycle of treatment.”

As he declined, Josh Carney thought constantly about what his death would mean for his family.

If only he’d died at a scene, he told his wife shortly before he passed, he would have known they’d be taken care of.

“When a death is considered line of duty, if their children attend a public university in South Carolina, their education is paid for,” Lillian Carney said. “He said if he was going to go, he wished he would have been hit by a car while responding to a motor vehicle accident, because at least it would have been a line-of-duty death.”

Josh Carney wasn’t the first member of Midway Fire and Rescue to be diagnosed with cancer and he wasn’t the last. In the short time since his death, two more of Midway’s 65 firefighters have battled the disease, according to Lenker. Both are now cancer-free and back at work.

Myers is back on the job as well. He started working again several months after his 2017 surgery as he went through chemotherapy.

When he finished treatment, he rang the bell on the front of the pink truck and left his signature.

But in late summer of 2019, a PET scan found a small amount of cancer in his stomach, and he resumed chemo.

“They’re just trying to be aggressive with this one little spot to make sure they take care of it,” he said.

He’s still working on a limited basis, though, supervising the department’s training program.

And as his fight against cancer resumes, his fight to create safer conditions for his fellow firefighters continues as well. He recently volunteered to mentor other firefighters diagnosed with cancer and continues to train recruits how to protect themselves.

Lillian Carney has joined the effort as well. She started the Carney Strong Initiative following her husband’s death to spread awareness and grow access to decontamination wipes.

She had a voice in drafting the bill currently in the state Senate. She said that the lack of support her husband received from the state after his diagnosis was startling, and she’s hopeful other firefighters won’t have to go through it.

“He not only put in 25 years in the fire service, almost 18 of that was here in South Carolina,” she said. “And then after all that time, there was just nothing.”

Conor Hughes is a public safety reporter with The Greenville News. Contact him via email at chughes@gannett.com or on Twitter @ConorJHughes.

Plug Power Sells Stock to Gear Up for Hydrogen Economy