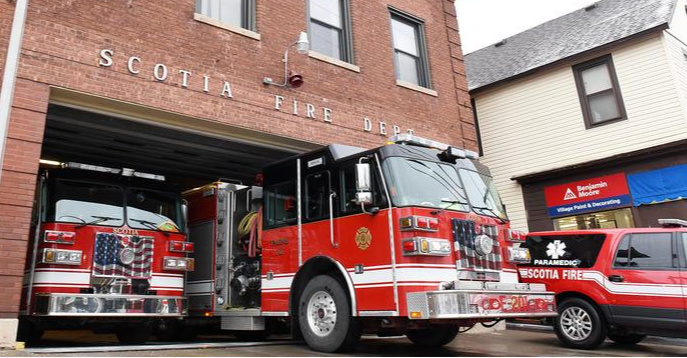 SCOTIA — Village officials have set a new public referendum on borrowing $12 million to build a fire station and rehabilitate the current municipal building, hoping work can start in 2021.

In a letter Sunday to village residents, Mayor Tom Gifford said the board has scheduled the referendum for Tuesday, Aug. 11. The vote was originally slated for April 7, but Schenectady County canceled it as one of the emergency measures taken in response to the coronavirus pandemic.

Should the Aug. 11 vote be canceled because the measures continue, Gifford said, the Village Board would take a bonding vote on its own authority at its Aug. 12 meeting — a vote that would still be subject to referendum if enough voters petition for one.

“We shouldn’t have a problem doing the vote on Aug. 11, because it will be after the [June 23] primary, so by then we should have figured out how to do [a vote],” Gifford said on Tuesday.

Some residents say that given the economic crisis caused by pandemic, it’s the wrong time to propose an expensive project that will raise taxes. But Gifford said the impact of any tax increase won’t be felt for 18 months to two years, and in the meantime the village should be able to get a low-interest rate when it borrows.

“The village is not responsible for the COVID crisis,” he said. “We hope everything we will be different by then.”

The plan to be put before voters remains the same as in April — the new fire station would be built in a corner of Collins Park between Collins Street at the Scotia branch library, with the truck bays facing Collins Street. The second part of the project would rehabilitate the current village hall-fire station building at Mohawk Avenue and Ten Broeck Street, modernizing its utilities and converting the space now used for fire trucks into expanded offices for village employees and the village police station.

The entire project would add about $172 annually to the tax bill of a $100,000 property, according to village estimates.

While a number of residents have spoken out against the use of parkland for a fire station — approval from the state Legislature would be needed to use the land — Gifford said he believes that overall, there is public support for the plan, which he said has been in development for two years. A number other sites around the village were considered, he said, but are unavailable or impractical.

“Time is very critical on this project and every month of delay could cost us a lot more money,” the mayor wrote in the open letter. “In talking to people, we feel that an overwhelming majority of residents understand and agree that the village needs to improve facilities for the health and welfare of village employees and village residents.  We feel that we have examined every possibility and scenario and have arrived at the best solution.”

The board’s argument is that the fire station is more than 100 years old and in serious need of replacement due to its age and various inadequacies related to the size and weight of modern fire trucks. One truck was recently relocated to the village public works garage because the flooring in the fire station, which has a basement below it, has deteriorated.

“We desperately need it now,” Gifford said of the new station.

Complicating the effort is that the state Legislature, which must approve the parkland use, is adjourned due to the pandemic, and may not reconvene this year. If necessary, Gifford said the legislative approval will be sought after the process has started. The village has already proposed a land swap to add parkland of the kind the Legislature generally requires.

“We firmly believe that this project is a public benefit and that the final result will be a net improvement to the village’s parkland,” Gifford wrote on his letter. “We also believe that the NYS Parks and the state Legislature will agree with us.”

The swap would involve creating a recreation trailhead at the end of Schonowe Avenue, where the village wastewater treatment plant was once located. The bike trail from there to Freeman’s Bridge Road is to be reconstructed. Both those projects are already proposed and have state grant funding, independent from the land swap proposal.