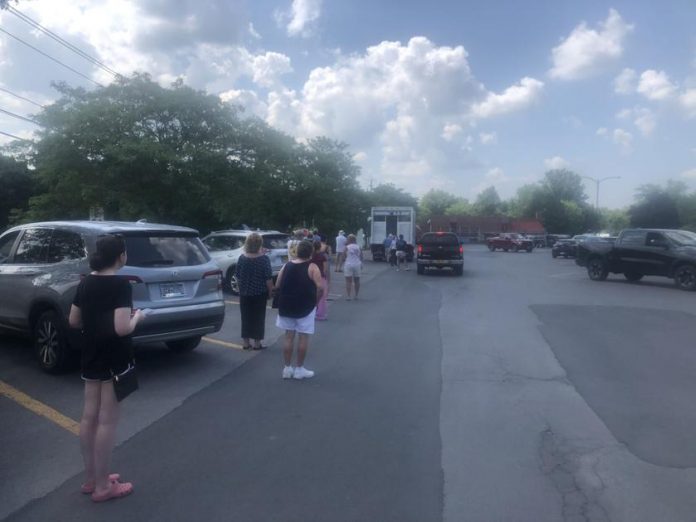 WATERTOWN — A seafood and lobster truck that’s been stopping in Watertown for nearly 45 years is easily two-fold busier during the pandemic than it has been in the past.

Last Thursday it was around 90 degrees outside by 11 a.m., yet the line outside the truck was the longest customers had ever seen. It’s a rare enterprise that’s benefited as some markets have seen shortages of protein, or how customers don’t have their favorite restaurant to go to. They still want fresh seafood, and it doesn’t get much fresher than at Rob Babcock’s Owls Head Lobster Company.

“This is the busiest that it’s ever been, which is wild considering how hot it is out here,” said Madelin Prochaska, who’s been an loyal customer for three years. “It might be because other things are shut down, it might be word of mouth. I’ve told like 10 people about it.”

Ms. Prochaska picked up some shrimp, Arctic char and crab cakes. Others were there for the smoked salmon, scallops, tuna, swordfish or mussels. It’s a large menu taped to the back of the truck, which sits in the Tops parking lot on Washington Street from 7 a.m. to noon every Thursday.

Carol Capon, Watertown, was in line. She and her husband have been buying their seafood from the truck before the turn of the millennium. She thinks the truck full of fresh seafood is conducive to being successful during a pandemic.

Terry Freeman was there to get clams, oysters and salmon. He, too, has been going there for his seafood for years.

The owner, Mr. Babcock, bought the lobster company in 2004, but its history goes further back. The company got its name from where it originated, in Owls Head, Maine. In 1972, an entrepreneur whose wife’s family was in the lobster business decided to mobilize it. He filled a pickup truck full of lobster and headed west. His first stop was in a town near Utica called New Hartford. It expanded from there, focused mostly on college towns like Ithaca, Watertown, Hamilton, Utica and Syracuse, among others.

When the mid-1980s came around, supermarkets started installing lobster tanks, resulting in a chunk of business being taken from companies like Owls Head. At that time people were also asking for the trucks to have fresh seafood, so they started stocking it to supplement the loss from decreasing lobster sales.

Before Mr. Babcock bought the company, he was in the business doing his own truck for a broker for 10 years.

Mr. Babcock’s fish, which he selects, is caught on a Tuesday, processed and shipped on a Wednesday and then brought to Watertown on Thursday.

“So everybody in Watertown is getting the freshest fish I could possibly get,” Mr. Babcock said. “We would love to come there more if we could, but it just doesn’t work with our schedule.”

Indeed. It’s been two-fold busier in Watertown during the pandemic. Mr. Babcock can’t pinpoint why, but there are factors.

“A lot of places are closed, so they don’t have a good place to go out to eat, and we’ve had a good reputation up there and people have passed the word around,” he said. “And in the months of April and May, I noticed this country was in a big shortage of protein, so I think coronavirus has kind of gotten people going back to the old ways of how they get their seafood.”

The environment does promote safety, too. It’s outside yet people are still wearing masks and standing six feet apart while in line. It’s a model that has succeeded during the pandemic, and Mr. Babcock can’t do much beside take the opportunity.

“I can only benefit from the free enterprise system,” he said, “and that’s what this business is based on.”