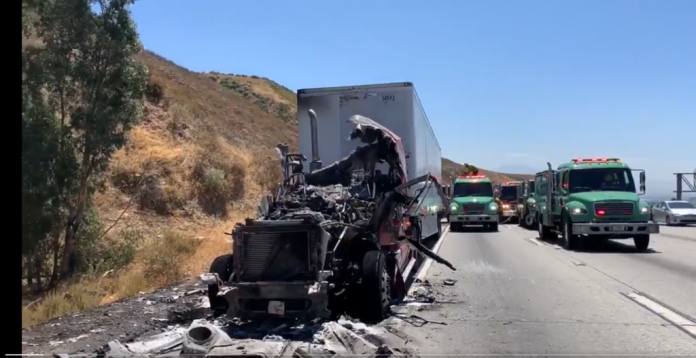 A semi-truck fire on the 15 Freeway in the Cajon Pass north of Kenwood Avenue spread into a drainage ditch, and firefighters fought an approximately 10-acre blaze that closed two northbound lanes Sunday, authorities said.

The fire was reported just before 10 a.m. and spread shortly after that. The San Bernardino National Forest said just after 12 p.m. the fire’s forward progress had stopped, but it was not yet contained.

Caltrans reported around 10:30 a.m. that outer lanes of the freeway were blocked due to the fire, with no forecast of when the lanes would re-open. The lanes remained closed into the early afternoon

The big rig was hauling about 72,000 pounds of food, according to the California Highway Patrol log of the incident, which described the cargo as a non-hazardous load.

There were no reports of injuries.

The fire is holding at 10 acres, forward rate of spread has been stopped. Crews are making good progress. Still at 0% containment. pic.twitter.com/1vqrBF5o7O

The CHP said the fire spread into a drainage ditch. The U.S. Forest Service said it was responding to the fire along with San Bernadino County Fire and Cal Fire/San Bernardino Unit.

This story is developing. Check back later for more details.