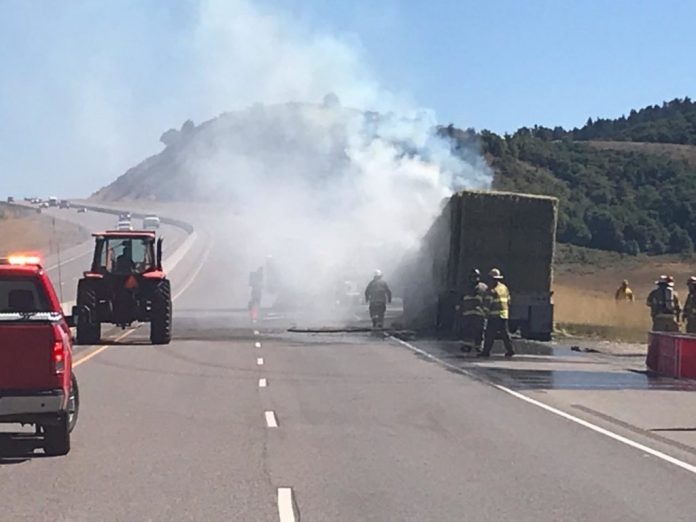 LOGAN — A fire Thursday afternoon injured one man and partially closed Sardine Canyon, US-89/91 for more than four hours. The blaze was reported at 2:15 p.m.

“The driver pulled over and noticed the exhaust, coming from the semi-truck had started the hay on fire.”

The driver, a 60-year-old man, reportedly climbed on top of the trailer to try and put out the fire. While using a shovel to smother flames and embers, he fell off the trailer and broke both ankles.

Brenchley explained the driver fell into the roadway and was unable to move.

“Some passerby’s rushed in and pulled the driver to safety, getting him out of traffic. A couple others tried to put the fire out with some dirt and the shovel, but by that point it was too far along.”

Fire fighters responded to the area and began extinguishing the blaze. It took several hours while they unloaded the hay bales and doused them.

Since there were no hydrants, tinder units had to transport water from the nearby rock quarry.  A bulldozer also helped unload the hay bales, so crews could break them up and extinguish the fire completely.

Troopers were able to reopen the highway at 6:30 p.m.

Truck versus 2 pedestrians in Prescott sends both to hospital –...