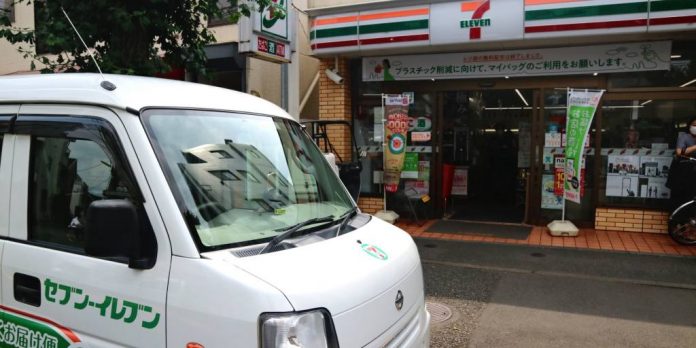 TOKYO — Seven-Eleven Japan, operator of the country’s biggest convenience store chain, will launch fast home delivery of merchandise from its outlets, as the industry increasingly seeks to capitalize on the growing demand for such services triggered by the coronavirus pandemic.

Starting with 100 7-Eleven stores in Tokyo in the current fiscal year 2020, the company plans to expand the network to at least 1,000 outlets from fiscal year 2021. Seven-Eleven envisions deliveries being completed in as early as 30 minutes as a way to challenge leading e-commerce operators such as Amazon Japan.

Answering demand for home delivery spurred by the pandemic is seen by Seven-Eleven and other chains as a new pathway to growth.

Japan has some 50,000 convenience stores. But reflecting the maturation of the business, that number recorded its first decrease in 2019, arousing concern among industry officials that the market is hitting a growth ceiling at an annual figure of 12 trillion yen ($113.29 billion).

Also last year, online sales of goods, led by such e-commerce companies as Amazon and Japan’s Rakuten, expanded 8% from the previous year to 10 trillion yen. Seven-Eleven thus intends to integrate its physical stores with online technology in a bid to close in on such players in that market.

For the home delivery service, Seven-Eleven will offer some 3,000 products, such as food and daily necessities on sale at each of its stores. It will receive orders via a dedicated website for delivery in as little as two hours in a tie-up with an affiliate of logistics group Seino Holdings. But it will seek in the future to slash the minimum time of delivery to half an hour. The company also seeks to cultivate demand by elderly households in rapidly aging Japan.

In conventional e-commerce, deliveries are made at the earliest the day after an order is received and end at 9 p.m. in most cases. Seven-Eleven hopes to gain a competitive edge over Amazon and other e-commerce companies through faster delivery and acceptance of orders until late at night.

Convenience stores in the Seven-Eleven chain will play the central role in its program to facilitate fast delivery as ordered products will be made ready for dispatch at outlets located near the customers who place orders.

The company is already testing the new service at 39 stores in Tokyo, accepting orders online between 9 a.m. and 10 p.m. for delivery to locations within a radius of 500 meters from the outlets. Delivery fees range from 110 to 550 yen, depending on the time of day, and are waived for orders of 3,000 yen and above. Fees and other terms many change when the full-scale service begins.

To reduce the burden on stores, Seven-Eleven will provide each one with a smartphone designed for the service and which displays orders in the form of bar codes that can be confirmed through scanning on a cash register.

Whenever possible, a sales clerk will put orders in bags for pickup by a Seino driver for delivery to customers. Seven-Eleven plans to assign a Seino Group driver to cover two to three stores when the commercial service begins.

Seven-Eleven’s planned launch comes as home delivery service companies are struggling with a serious labor shortage. The company plans to expand the fast delivery service to thousands of its stores in the future but only if it can secure the necessary workforce.

In the U.S., top retailer Wal-Mart Stores has launched same-day delivery of perishable food products, daily necessities, home appliances and other products in a tie-up formed in August with Instacart, a leading home delivery service provider.

In the past, Seven & i Holdings, Seven-Eleven’s parent, offered a service to receive orders online for customer pickup at physical stores. But the service, called Omnichannel, failed to fully take off due to a limited product lineup.

The coronavirus has prompted consumers to purchase convenience store staples such as foodstuffs and everyday sundries from online retailers on a daily basis.

Are chrome grilles ‘designed to intimidate & kill pedestrians’? Liberals and...

Essential workers — including truckers — would get a massive tax...