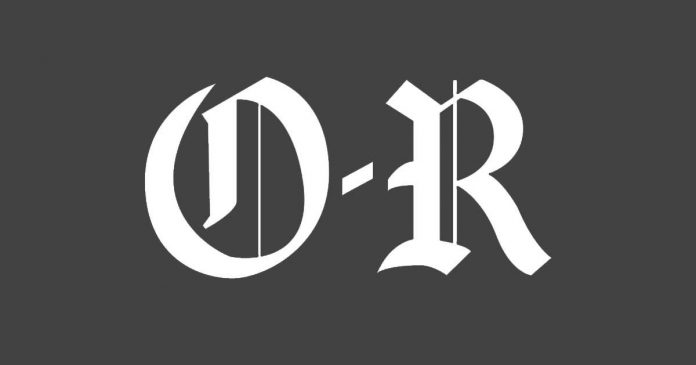 A kayaker then paddled the bait about 300 yards offshore – much further than the average angler could cast.

The fishing line was thick. The rod was stout. The reel was wide and hefty. Compared to ordinary fishing gear, it looked like a Mack truck next to a Fiat.

Everything about shark fishing is heavy, far and dangerous.

“Big fish, big bait,” Beard said. “It’s all about the fight. Catching the biggest predator out there.”

Beard, 30, has been fishing for sharks from the shore since his teens. He lives in Buxton and works at Frisco Rod and Gun, just minutes from the ocean. He owns an assortment of shark rods and smaller traditional rods, many of which bristled Monday from the rack at the front of his Toyota truck. He drives the four-wheel drive vehicle onto the beach a few feet from the surf.

Beard said he’s seen an increase in interest by novice anglers at his job.

When people ask advice, he’s quick to tell them to stay way from the mouth.

Beard’s favorite spot to fish is near Cape Point in Buxton, where the Outer Banks juts into the Atlantic Ocean and the Gulf Stream and the Labrador Current meet. Waves from the south crash against waves from the north, creating a volatile surf.

Fish species from warmer and colder climates mix there, making it a unique spot loved by surf fisherman around the world.

Sharks love it, too, for the same reason.

“The point is the sharkiest place on the whole beach,” Beard said. “It’s like a feeding frenzy every day.”

The North Carolina coast gets a wide variety of shark species that feed close to shore including dusky, spinner, hammerhead, sandbar and blacktip. The state limits sizes and specifies the species that must be released.

Blacktips are the most challenging and can be kept if they are at least 54 inches long. Only one per angler, per day, is allowed.

“A blacktip is the most dangerous shark to mess with in the surf,” Beard said. “They’re so athletic and energetic. If you lose your grip, they can hit you.”

While unhooking a shark, it is important to keep them in the water so they can continue to breath before release, Beard said.

To catch a shark, Beard works his way up the food chain. He said he uses smaller bait, like a piece of a fish, to first catch Spanish mackerel or stingray. He then uses those as shark bait.

Beard catches all sizes of sharks from the shore, including some more than 10 feet long and weighing more than 200 pounds. Traditional rods will work for smaller sharks, but the big ones require the large gear.

When a shark grabs the hook, he fastens a fighting belt around his waist that steadies the rod and gives him more leverage. A rope attached to the belt is tied to the truck or held by a buddy.

“A big shark will pull you into the ocean,” Beard said.

Beard and his friends Alex Bonner, David Brayman and Kyle MacMillan all join in the fun. They are different ages, but share a passion. They love to spend long days and nights with lines in the water.

While the bait soaks, they sit under a portable canopy, sip drinks and tell stories. Later, they might cook a few brats on the grill while keeping an eye on their rods.

Bonner recounted the time three years ago when he paddled bait far off shore to where hungry spinner sharks were jumping from the water. He shifted his weight wrong reaching for bait and fell into the water with the bloody fish-head bait.

“Oh no, he’s going to get eaten,” Beard remembers he and others joked onshore. Then, a second later, a little more seriously, somebody asked, “Should we go out there and save him?”

Bonner acknowledged he was a little panicked at first, then regained his composure and climbed back into the kayak.

Beard did not catch a shark Monday, but it didn’t matter. He’s caught dozens before and will again.

His job allows him enough time off to be on the beach often.

“It’s less about money and all about fishing,” said Beard. “Might as well be happy and enjoy what you do.”

For copyright information, check with the distributor of this item, The Virginian-Pilot.