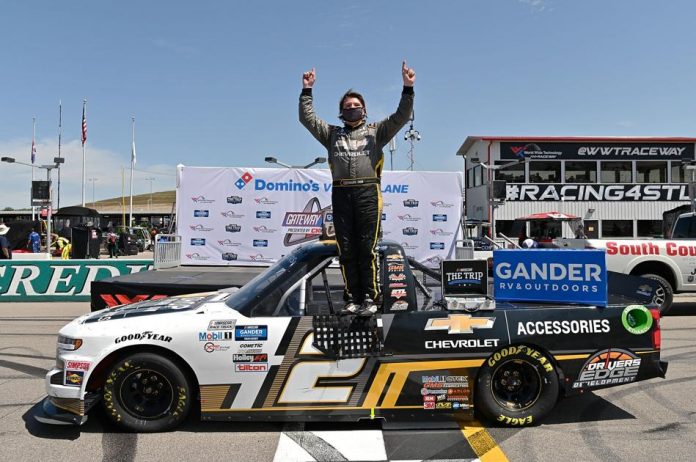 It was the 22-year old Californian’s third career win and significantly, his second victory in the season’s three-race Triple Truck Challenge just this month, which earned him a $150,000 bonus payday.

Sunday’s victory did not come without controversy, however, as Creed’s No. 2 GMS Racing Chevrolet collided with the race’s most dominant driver, Todd Gilliland racing hard with just under 40 laps remaining. The contact got Gilliland’s race-leading No. 38 Front Row Motorsports Ford out of shape and forced him into an unscheduled pit stop. And Gilliland, who had already won both Stage 1 and Stage 2 and led a race best 76 of the 160 laps, ultimately finished 22nd.

“The [win] feels great but I want to start by apologizing to the 38 (Gilliland),” Creed said. “It’s so hard to pass here and I got down into his inside and just was really loose getting in. He was really close to my door. They were having such a good day and me and Todd are buddies. I hate doing that to him. They are a strong team. He owes me one.

“But hats off to my guys. They made great adjustments all day. Came from 17th and had my work cut out for me.”

Championship points leader Austin Hill finished third, followed by 17-year old Sam Mayer, who led an impressive 24 laps before getting beaten by Creed on a restart with 13 laps remaining. Stewart Friesen, rounded out the top five, his third straight top-five finish in what’s been a largely inconsistent season for the Canadian driver.

“I was just trying to play games on the re-start and it didn’t work out in my favor obviously,” said Mayer, who was making just his fifth series start. “That’s what I get for playing games. I was a sitting duck really. I am proud of my GMS guys today.”

The vast majority of the race stayed green and early on, especially, looked to be Gilliland’s for the taking. His stage wins are the first for the 20-year old in two seasons and a victory would have automatically meant a position in the 10-driver Gander RV & Outdoors Truck Series Playoffs, which begin Sept. 25 in Las Vegas.

“I think he [Creed] knows what happened and I know what happened,” an obviously frustrated Gilliland said after the race. “He just drove in there over his head and got us. That’s racing. I just hate it.

“Had such a good truck there from the beginning going from sixth to first under green,” he continued, “Then to win both stages, gosh, I feel like it was such a good day and it was one of the more dominant truck races I’ve ever run. We just have to keep this up.”

Despite the frustrating result, Gilliland’s two stage wins earned him enough points to keep him inside that 10-driver Playoff cutoff. He is ranked ninth, tied with 10th place Tyler Ankrum 15 points ahead of 11th place Derek Kraus, who finished 13th on Sunday.

The series moves to historic Darlington (S.C.) Raceway for the South Carolina Education Lottery 200 next Sunday afternoon (2 p.m. ET on FS1, MRN, SiriusXM NASCAR Radio). It’s the first time since 2011 the Gander Trucks will compete on the egg-shaped historic track.


Success! An email has been sent to with a link to confirm list signup.


Error! There was an error processing your request.

Please support us by subscribing or making a contribution today.

General Motors’ Deal With Nikola Could Double Its Stock Price