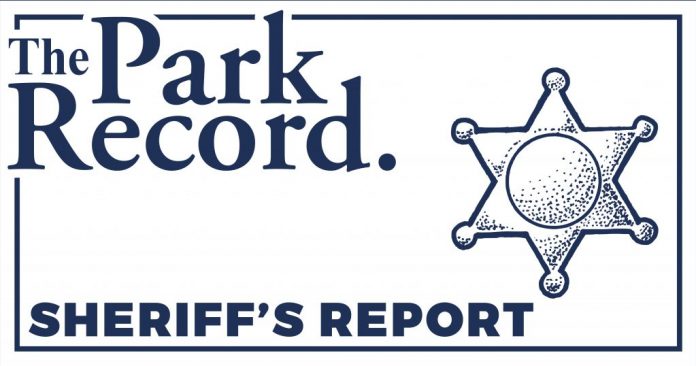 A fight broke out at a party at a home in the Snyderville Basin after one person disrespected San Francisco while another party attendee was wearing a San Francisco hat, according to a report from the Summit County Sheriff’s Office.

One man was transported to the hospital with moderate facial injuries, and multiple underage attendees were cited for consuming alcohol, according to the report.

Roughly 10 people attended the party but many fled when deputies arrived. Those who stayed did not cooperate with investigators.

Deputies indicated there were no suspects in the fight and that they would follow up.

According to the Sheriff’s Office, law enforcement responded to several other calls between Monday, Aug. 3, and Sunday, Aug. 9, including multiple Search and Rescue responses and a $10,000 fraud.

Summit County Search and Rescue responded to a report of an overdue party that had been hiking near the Henry’s Fork Trailhead. One man had returned around 9:30 p.m., but a woman had not. She was later located.

Deputies stopped a vehicle near Canyons Village for driving without insurance. The driver, a 36-year-old Heber man, was found to have an active warrant and was arrested and cited for driving with a denied license.

A mother called to report her 18-year-old son had damaged property and threatened her while at her Woodland home. The son had left by the time deputies arrived and they were unable to find him. Deputies indicated the case would be forward to the County Attorney’s Office.

A 19-year-old Salt Lake City man was cited for retail theft after admitting to stealing a $23 shirt from an Outlets Park City store. He had been held for deputies inside the store and was released after being cited.

A 27-year-old Bountiful man was arrested on suspicion of possession of marijuana, cocaine and paraphernalia after deputies stopped his vehicle on S.R. 224 because a records check showed he did not have insurance. Deputies searched the vehicle after smelling marijuana, booked the man into jail without incident and released the vehicle to the passenger.

Deputies responded to a report of domestic violence in Oakley but found no evidence of a physical altercation. Deputies advised the couple to separate for the night and referred the case to the County Attorney’s Office to be screened for charges.

Deputies assisted the Utah Highway Patrol in directing traffic at the Jeremy Ranch roundabouts after Parleys Canyon was closed because of a wildfire. The canyon was re-opened westbound around 5 p.m.

A man reported one of his mountain bikes was stolen from the garage of his Redstone home. Deputies indicated they had no suspects, that they were unable to list the bike on a national database because the man did not know its serial number and that the case would be closed.

Search and Rescue was paged to the Allsop Lake area in the Uinta Mountains to assist with an injured person, but the call was canceled after air resources transported the person to the hospital.

A vehicle was stolen from Bear Hollow after its owner left the keys in the vehicle overnight. Deputies indicated they listed the vehicle on a national database of stolen goods.

A truck was stolen from a Kilby Road workplace. The owner stated he had left the vehicle in the same place he does every day for work and that it was locked and he had the keys with him. Deputies indicated they listed the vehicle on a national database of stolen goods.

A Summit Park resident reported his social security number was used to obtain $1,200 worth of services in North Las Vegas.

A Jeremy Ranch man reported someone had stolen the rear license plate from his pickup truck. Deputies indicated they listed the license plate on a national database of stolen goods.

Deputies responded to a panic alarm set off at a Silver Creek convenience store after a robbery in which three men activated and stole gift cards without paying for them. Deputies indicated they would review surveillance footage.

A 22-year-old Coalville woman reported that she has a stalking injunction against a person who is continuing to harass her. She said that the person, a 26-year-old computer programmer, has shared intimate details about her with other people in a chat room she uses for school, among other violations of the protective order. Deputies indicated the case would remain open and they would follow up.

A Snyderville Basin man reported $10,000 had been stolen from his bank accounts between two withdrawals that had been made out of state. He did not know how anyone obtained his financial information.

A 29-year-old man was arrested on suspicion of drug charges after deputies responded to a Jeremy Ranch home after receiving a suspicious call. After the man admitted to using cocaine the prior night, deputies searched the home and found drugs and paraphernalia.

A truck was stolen from a Pinebrook work site after a man left it unlocked with the keys in it for about an hour. The truck contained valuable items including work tools and a cellphone. Deputies indicated they listed the items on a national database of stolen goods.

Another work truck was burglarized at a Pinebrook construction site with the victim losing a black backpack that did not contain any items of value.

A Jeremy Ranch mother reported that her 11-year-old daughter had been communicating with older men on the internet and over text messages and had been asked to send sexually explicit photographs via text. Deputies indicated the case would be forwarded to the Investigations Division.

A suspect used four counterfeit $50 bills to purchase $195 worth of merchandise from an Outlets Park City store. Deputies indicated they would follow up.

Deputies responded to Samak for a report from a person who claimed she could hear her neighbors fighting and what sounded like a woman being assaulted. The two left on foot before deputies and Kamas City police officers responded and they were not located.

Cigarettes more in demand than alcohol in Pretoria east

In Gallup, surrounded by the Navajo Nation, a pandemic crosses paths...