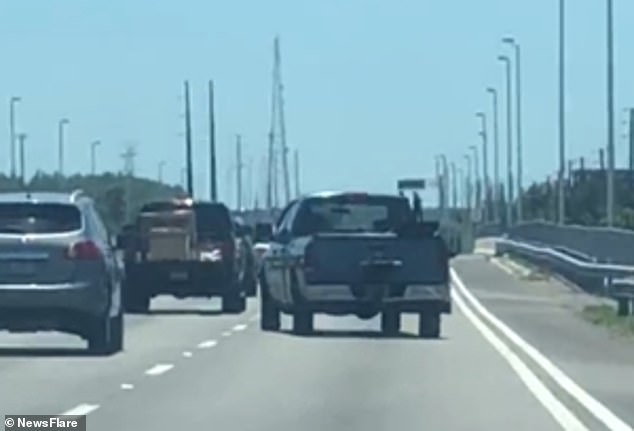 ‘How is he driving?!’ Shocking moment a car defies physics and drives at a diagonal down a Florida highway

By Lauren Edmonds For Dailymail.com

A driver in Florida was shocked when he saw a truck drive diagonally down a highway last week.

While driving last Tuesday in Palm Harbor, a resident named Chase and a passenger encountered the bizarre sight.

Cell phone footage obtained by Newsflare shows a dark-colored truck cruising in the far right lane of the highway.

But the vehicle appears to be driving at an angle with its front right tire leading the way.

‘How is he driving?’ said the passenger, as the two watch the scene in a mix of confusion and amazement.

‘You have to be on a constant turn or something?’ they added.

The video was initially posted to Reddit thread ‘Idiots in Cars,’ and has quickly gone viral on the site.

Other users chimed in with jokes about the bizarre moment, with some blaming the act on the state’s infamous Florida Man.

‘When you’re playing Mario kart and power slide through the whole map,’ one user wrote. 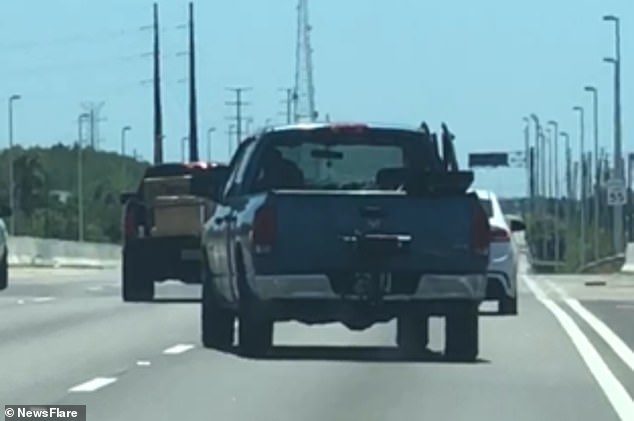 A fellow Florida resident said: ‘This Florida man’s abilities far exceed my own.’

But as some commenters pointed out, the vehicle’s diagonal tilt is because of a problem with the axle.

‘Dog Tracking’, or when a car appears to be driving sideways, is a phenomenon that often happens in vehicles with a straight axle.

This can occur when the rear axle is not properly lined up perpendicular to the axis of the vehicle.

‘Often times, it comes after some kind of accident,’ Woody Rogers of Tire Track told Jalopnik.

‘It’s a symptom of probably a much bigger problem.’

Food Rescue Steps Up Swiftly in Response to COVID-19

Truck stolen out of Taylorsville driveway, suspect backs into owner in...