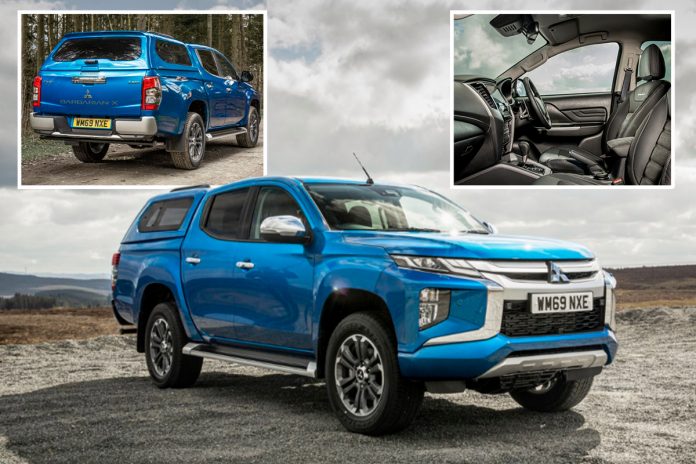 A BARBARIAN, by definition, is an undesirable, uncivilized type with an unfortunate penchant to pillage.

And to the ancient Greeks and Romans, a barbarian was anyone from out of town who didn’t speak their lingo.

But to pick-up truck-loving Brits in these, err, enlightened times, the word barbarian is now synonymous with luxury.

And we lap these big boys up, too – as we buy the lion’s share of Europe’s Mitsubishi L200s.

But a Barbarian X? Well, it’s X-ier than your average Barbarian.

BUT it doesn’t tackle the rough stuff any better than a bog-standard L200.

It doesn’t go any faster either.

Under the chiseled, clamshell bonnet lies the same 2.2-litre, 150hp, four-cylinder turbo diesel as the bargain-bucket 4Life model . . . which sells for over £10k less.

You can’t help but feel Mitsubishi missed a trick here while Ford unleashes its more potent Ranger Raptor to the exact same market.

This is the sixth generation of the Japanese workhorse that’s been rolling off production lines since 1978 – and it’s unquestionably the most muscular to date.

It now not only looks the lifestyle part but proves particularly liveable, boasting most of the comfy mod-cons and USB ports you’ll ever need.

And beyond being able to switch from 2WD to 4WD on the go there is a Land Rover-esque raft of driving modes tailor-made for shortcut simplicity to make you look effortlessly manly on any terrain.

Steep hills, muddy ruts, deep snow or on the rocks – this family-friendly beast gets you and four passengers places no humdrum hatchback can. But perhaps more crucially, you can still save a shedload of dosh buying one of these over a regular SUV as it falls into the light commercial vehicle bracket.

So you can claim the tax back if you’re a business owner and benefit from far lower benefit-in-kind repayments.

You’ll also only pay a fixed flat rate of £260 for the first year as it’s exempt from emission-related surcharges any similarly spec’d SUV would be heavily knobbled for.

Factor in a generous five-year warranty too and the potential savings just keep stacking up. Even if the only actual payload you’ll chuck in the flatbed is your kids’ bicycles as you head to your nearest beauty spot least you’ll be beating the taxman if not the social distance police.

With good body control & direct steering, the Corsa-e is a lot of fun

While you can find more equipment and more power in other more premium pick-ups, or save a few thousand on something less tried and trusted, the Mitsubishi L200 Barbarian X marks the sweet spot if you’re brave enough to introduce it to your family.