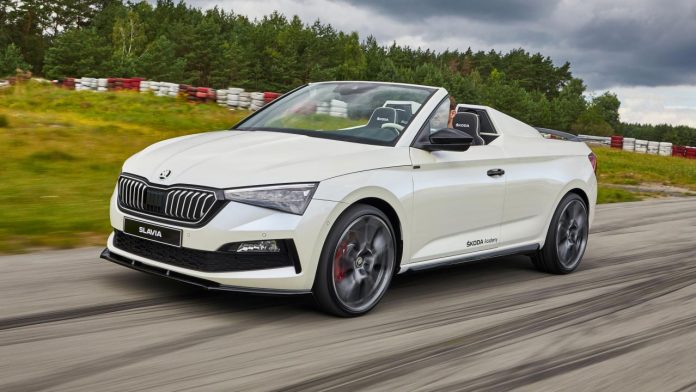 Every year Skoda sets the students at its training academy a little challenge – to design and build a one-off concept, using one of the company’s existing models as a base. Last year’s graduates turned a Kodiaq into a pick-up truck, for example, while 2017’s trainees made a beach buggy out of a Citigo.

So what did the Class of 2020 decide to do? Why, turn a Scala into a roof-less speedster. Obviously. The Slavia commemorates 125 years of Skoda – it shares a name with the bicycles produced by company founders Václav Laurin and Václav Klement, while the styling is supposedly inspired by the pint-sized 1100 OHC racer.

Technically the Slavia is a standard Scala, though it has a custom exhaust, the wheels from a Kodiaq vRS and the brakes from an Octavia vRS. The engine is a 1.5-litre turbocharged four-cylinder making 148bhp, which drives the front-wheels through a seven-speed DSG.

The students welded the rear doors, chopped the roof off (and, thankfully, reinforced the chassis) and fashioned a double-bubble cover to fill the space behind the racy Sparco front (and now only) seats. Oh, and fitted Need For Speed-style underbody LED lighting. Inside there’s a chuffing massive stereo – because teenagers – and a pair of e-scooters hidden in the boot.

What do you reckon? Cool or a bit naff?