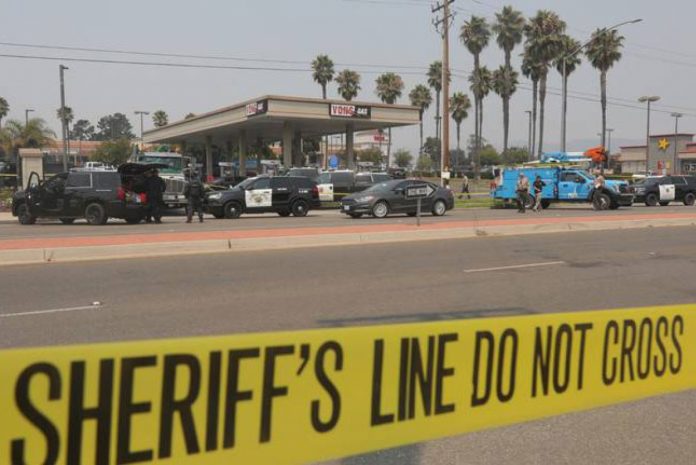 A gunman who was killed on Friday in shootout with police after he opened fire outside the Vons grocery store in Nipomo was identified Monday.

Huffman fired at least 20 rounds into the parking lot near the grocery store, into the nearby street and into the Vons gas station before he was shot and killed by California Highway Patrol officers and sheriff’s deputies, Parkinson said.

No bystanders or law enforcement officers were injured during the incident, he said.

“You can imagine with that many rounds being fired, we really lucked out,” Parkinson said.

A woman was sitting in the passenger seat of Huffman’s vehicle before he began shooting, but she doesn’t appear to have been involved in the incident, Parkinson said.

The woman — who wasn’t aware Huffman planned to open fire — exited the vehicle and fled through the parking lot during the shooting, he said.

Huffman’s motives for carrying out the shooting are currently unclear, although authorities suspect he may have been suffering a “mental health crisis,” Parkinson said.

He had no significant contact with law enforcement prior to the shooting, according to Parkinson.

“We have a mental health problem in our nation that truly needs addressing and it can’t just be (addressed by) contacting, just involving law enforcement,” Parkinson said. “It’s got to happen at earlier stages. There needs to be more resources for families who are going through this with a family member and we’re going to need to make an investment because the problem is growing.”

Details of the Shooting

The shooting took place at about 11:23 a.m. Friday in Nipomo outside of Vons on Tefft Street.

The two employees and a witness had locked themselves into a back office while Huffman shot around the store, Parkinson said Monday.

A man who realized which vehicle belonged to Huffman blocked Huffman’s vehicle with his own truck before fleeing the area.

“We had two very attentive and well trained clerks that reacted immediately, and then we had a citizen that got involved in order to not allow the suspect to get back in his car and leave the area, and I think all of them need to be commended,” Parkinson said.

The shooter was firing a handgun at random throughout the area, as well as shooting at people and vehicles passing by, Cipolla said.

A witness, Jeremy Bustamante, said he was driving in his truck when he saw the man shooting a handgun in the parking lot toward the gas station before the man walked toward Traffic Way.

“He had fired off a couple rounds toward a passing fire truck. Afterwards, he crossed the median and stopped a Honda. And he was able to wave his handgun around, get the Honda driver to open his door, and he sat there a couple minutes,” Bustamante said Friday.

The Sheriff’s Office confirmed the suspect “made contact with a person driving a 4-door black hatchback vehicle on W. Tefft Street just east of Mary Avenue.”

When sheriff’s deputies and the FBI arrived, they blocked off the area, closing Highway 101 Tefft Street off-ramps and Tefft Street at Oakglen Avenue.

The Sheriff’s Office has been unable to contact the driver and are still seeking information on what Huffman said to the driver.

“He started walking toward the credit union,” Bustamante said. “I tried getting away from him. And that’s when I ended up in the driveway of the Vons gas station.”

“Around that time, a sheriff came around. … I parked my truck and heard two shots go off. And after that, the guy was on the ground.”

The man was confirmed dead after a shootout with San Luis Obispo County sheriff’s deputies and CHP officers, according to Cipolla.