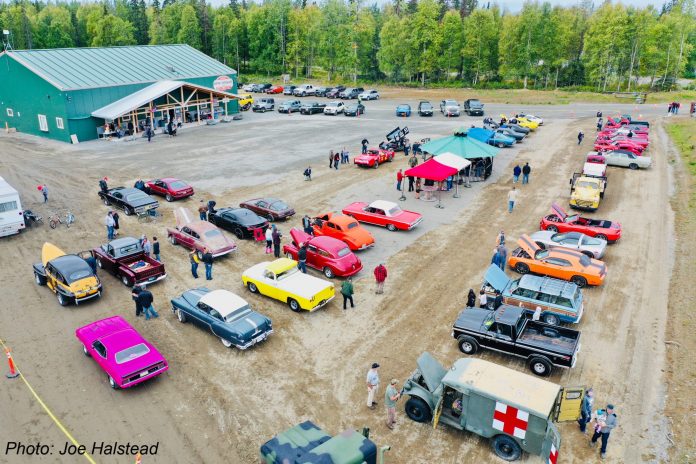 Cars ranged from muscle cars from the ’60’s and ’70s, hot rods from the ’40s, and classic trucks from the ’30s. There was one new Chevy Camaro. The show even featured some military vehicles and three race cars. Locals said it was the biggest car show ever on the Peninsula, and as far as Nikiski goes, it was the second largest event anyone could remember. The first largest was the opening of the Nikiski Hardware Store last year.

Between 250-300 people attended the show, and the weather cooperated, with the rain holding off until after the show was over.

“The general sense was that people have seen every event canceled and schools, swimming lessons, and T-ball have been canceled. This is the first time we’ve had an event and everyone was raring to go. Nobody was wearing a mask because it was outside and we didn’t need to,” said John Quick, co-owner of Nikiski Hardware. “I just think people were excited to be at a community event.”

Second place went to Lou Oliva’s ’57 Ford pickup. Oliva had the truck when he was a teenager, and found it years later, bought it back, and restored it to its original condition.

Man allegedly steals county truck after being released from jail

It Might be Harder and More Expensive to Drink French Rosé...

One person dead after two-vehicle crash in central Taranaki