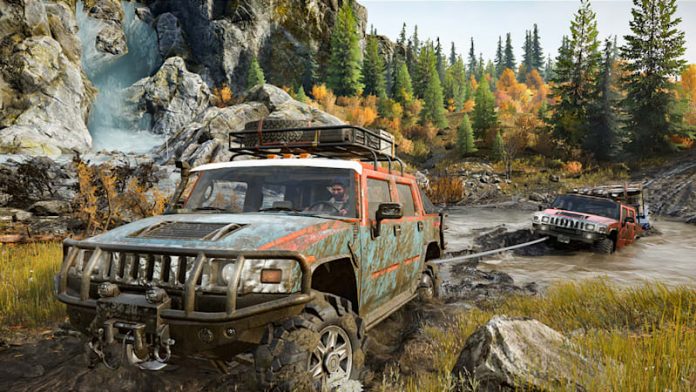 There’s no shortage of high-quality driving simulators on the market from more accessible games like “Forza Motorsport” to serious sims such as “iRacing.” They all simulate one kind of driving, though: high-speed driving on pavement. When it comes to technical off-roading, the choices shrink considerably, with one of the most prominent being the recently released “SnowRunner.”

“SnowRunner” is the latest off-road simulator from developer Saber Interactive, which also created “MudRunner” a sequel to “SpinTires” developed by Oovee Games. The game focuses on technical, slow-paced off-roading in a 40 different officially licensed vehicles from small pickup trucks and SUVs up to commercial-grade heavy-duty trucks and big rigs. All of these vehicles can be driven around and stuck in mud on 11 large free-roam maps in Michigan, Alaska and Russia. The vehicles can be upgraded and changed up to make it easier to drive around and to accomplish various tasks to open up parts of maps and to earn money and experience.

The game supports both single player and multiplayer adventuring, and it’s available on PC, PlayStation 4, Xbox One. Prices vary depending on system and where you purchase it. It’s as low as $39.99 for the standard version and $59.99 for the Premium Edition with access to future downloadable content on the Epic Games Store for PC. On PlayStation 4 and Xbox One, the standard version is $49.99 and the Premium Edition is $69.99. It’s available for all three systems now.

News Editor Joel Stocksdale: On the whole, I’ve been quite pleased with “SnowRunner.” It’s a nice break from a lot of the faster-paced games, both car-related and not, that I play. It’s relaxing to hop into my jacked-up Chevy Silverado and gently work my way up mountains and over boulders in the game’s large landscapes. And when that gets old, I can try hauling heavy goods in clattering old big rigs. It has a nice variety, and all of it can be done at an easy pace. In fact, most of it you need to take at an easy pace or risk getting stuck, damaging your vehicle, or losing your load. It’s also enjoyable working all the equipment and features of these trucks, as well as their upgrades to your advantage. You’ll play with winches, four-wheel-drive selection, different tires, cranes and more. And there’s a shocking amount of content, even with quite a few hours under my belt, I haven’t even finished 10% of what the game has to offer.

Visually SnowRunner is lovely. It has a solid draw distance that makes it easy to appreciate the carefully crafted scenery. The water and mud effects are gorgeous and mesmerizing as large tires spin through the different terrains. Each truck is thoroughly modeled with fully working interiors. This game would be particularly cool in VR. Also, compared with “MudRunner”, the vehicles and environments look more vibrant and saturated, compared to the previous game’s more brown locations.

I do have a few small gripes, though. The interface for the game is still cumbersome. The intro tutorial does a lot to help get things rolling, but you can still run into issues not knowing exactly what vehicles can tow certain trailers, how to activate and complete some tasks, and even just finding information about locations on the maps. The menus are dense and the text is small. Also, as in-depth as the game can be with some of its features, I’d like to see it go a bit further in some areas. For instance, I’d like to be able to play with tire pressures for better grip. I’d like to have more ways to upgrade engines and suspension. More customization in general would be great.

Still, “SnowRunner” is a fun game, and a great way to relax after whatever has you stressed out, provided that you’re ready to handle the slow life this game presents.

Multimedia Producer, Erik Maier: Before I get into my criticisms, I’d like to very briefly get up onto my soapbox and give a quick PSA. If you like something, whether it be a game, a movie, a TV show, whatever, never let anyone else take that away from you just because they didn’t feel the same way. Different people have different tastes, and as with everything in the media review world, it’s all just individual opinion. There are no absolutes at all and no real answer to the question “is this art objectively good?” Just like what you like.

That said, I did not like this game. This particular type of game is just not my thing. It’s slow, meandering, and in my opinion needlessly annoying. I can see the appeal if you’re into this type of methodical gameplay, but I’m just not. Right out of the gate, I found the tutorial borderline useless in teaching me how to actually play the game. Either I unknowingly prompted some weirdness or something glitched, but in my initial run-through of the tutorial I stopped being prompted to do, well, anything at all after the second task, leaving me confused and directionless with no indication of what I should be doing. It added frustration to a game with an already frustrating pace of play, frustrating controls, and a frustrating menu system.

I much preferred the way the main controls are handled in Mudrunner where you just simply hit A for all wheel drive, X for differential lock, and B for handbrake. Simple. Effective. In Snowrunner, for whatever reason, the series decided to add an extra layer of obtuseness by making you hold LB while fiddling with the right stick (the same stick that already has a job in controlling the camera, which is also terrible, by the way) to do those same actions. Why this change was made, I have no idea. For some semblance of “realism” maybe? For me, though, it made the experience worse. Also, to quickly go back to the camera, it’s 2020, there’s no reason for inverse camera controls to exist, ever. They’ve always been bad and they’re still bad. Make it an option, sure, but to make it default is just unnecessary.

Ultimately, I continued to wander around in the game for as long as my ADHD would allow, but I didn’t last very long. The final straw was when I got my truck 100% stuck, completely immovable, without a winch connection point in sight. I took it as a sign that this game just wasn’t for me. 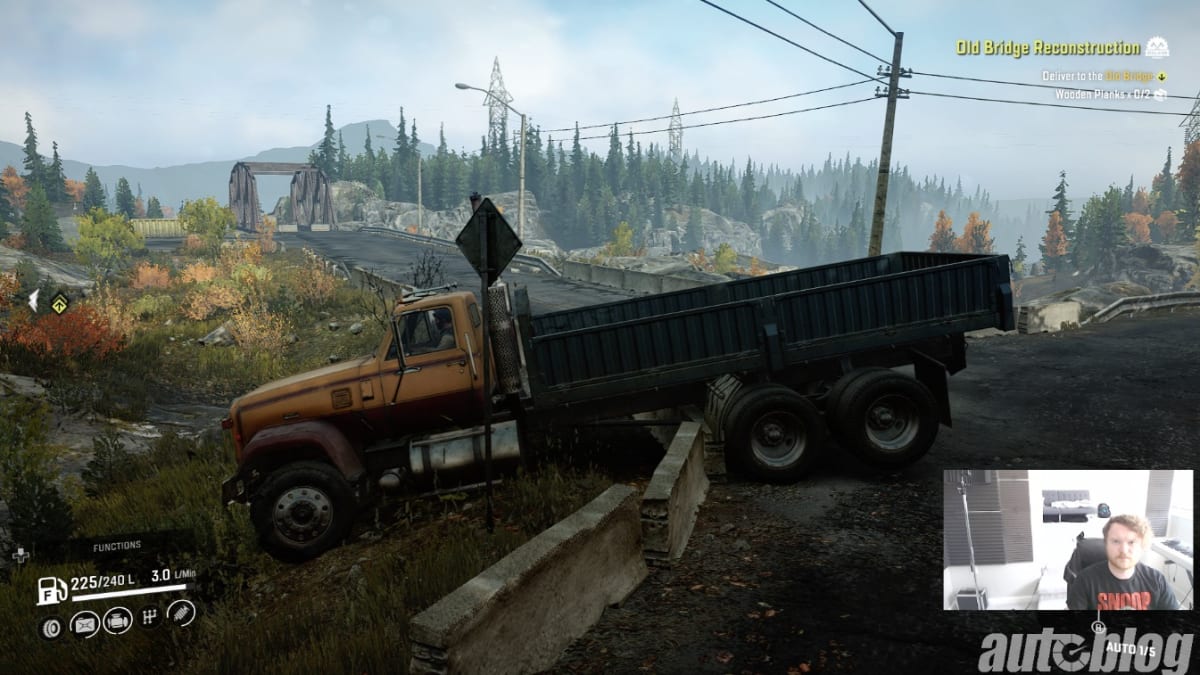 Senior Editor, Green, John Beltz Snyder: I fall somewhere between Joel and Erik on my enjoyment of the game, leaning more toward Joel’s positive impressions. When I started SnowRunner and the initial tutorial, it took me a good 20 minutes of being stuck in a mud pit before I could read the map correctly and figure out that my objective wasn’t the nearest watchtower, but one in a section of the map I hadn’t yet uncovered. I quickly learned how to use AWD, change between high and low gear and use the winch, sliding my truck around inches at a time in all directions before resetting to the beginning. I also quickly got a taste for how realistically unforgiving the terrain can be. I love that you can’t simply plow through mud, climb steep hills or ford rivers with impunity. Unlike real life, SnowRunner is forgiving in that you don’t have to get out of your truck and wade through slippery muck in order to attach your winch to something.

Once finally underway with a sense of my objective, I quickly became enamored with the leisurely pace of the game. You really have to take your time, read the terrain, explore the map and pay attention to every steering input, no matter the speed — inches count in this game — all while managing your fuel and, often, pulling a load. SnowRunner forces you into a state of mindfulness in a way that I found to be immersive and almost meditative. There’s certainly plenty of time to contemplate the next upgrade for your truck.

The vehicles in this game are terrific. And learning the character and nuances of driving each one is part of the fun. Just driving around and searching for your next truck is rewarding, too. In fact, I found that ignoring your objectives, and instead going off to find your own new trails and explore the map is far more appealing than running an errand for someone else in this game. 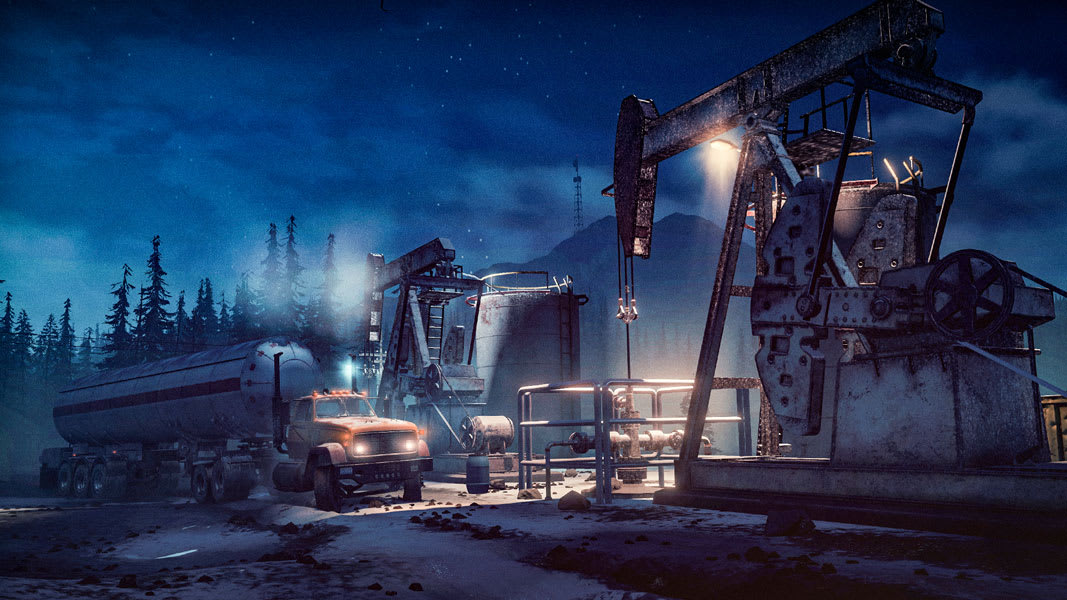 And that brings me to my greatest frustration with SnowRunner: not knowing what the heck I’m supposed to be doing. Sometimes you need a certain truck or trailer to complete and objective, but, like Joel pointed out, sometimes you just don’t know what you’re supposed to do with what, and where. Give me a mini-map with clear objectives on it, an easy way to toggle through my missions and perhaps a little more description what exact equipment I need to get it done. Honestly, though, I’d just settle for a mini-map. I don’t want to have to pause what I’m doing to bring up the full map — or worse, have to look something up on the internet — to find my way again. That takes me out of the experience, and back into the physical world. If there’s anything I want while playing SnowRunner, it’s to remain in the moment, completely immersed, one with the truck and a master of difficult terrain.

That said, this is a game I will continue to return to. When I get frustrated and quit, the reasons are quickly forgotten, and the allure of picking my way up a mountain in an old Chevy pickup, or reigning as king over the highway in a big rig, or just tinkering in my own garage, calls me back to my couch.

It also really makes me want to do some off-roading in real life. Playing SnowRunner, when it’s going right, can quickly bring me back to the feeling of galavanting around an off-road park during our mid-size pickup comparison, or my early driving years learning how much I could get away with in a 4WD drive vehicle before the next hill or mud patch punished me for my hubris. That’s the real beauty of SnowRunner.