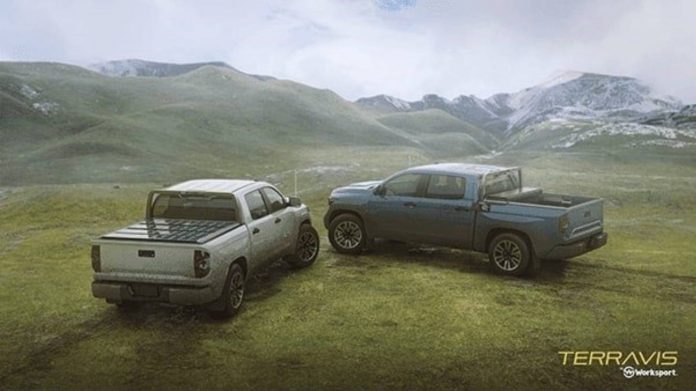 A Canadian aftermarket company is developing technology that creates one more use for all the versatile space on the tray of a big ute.

Toronto-based WorkSport is developing a solar charging array and battery storage system for pick-up trucks that also has the potential to contribute to the recharging of future EV ute models.

The existing business for WorkSport is a range of soft- and hard-top tonneau covers for North American market pick-up trucks.

Its new solar tonneau technology is branded as TerraVis and preliminary information released on a newly launched website says it will initially be aimed at powering accessories.

This ground-breaking innovation is the very first to combine practical, durable tonneau covers with a cutting-edge solar generation and energy storage system. The company says a market launch is 12-24 months away.

Monocrystalline solar panels built into the rugged tonneau cover will collect the sun’s rays and store energy in multiple battery banks. This energy store can then be used in situ to provide power to an electric motor or can be removed and used remotely using a so-called “breakaway’’ battery.

The company says there are endless possibilities for the technology ranging from supporting a workstation at home, or on the job, to powering a campsite, or even providing immediate power in the face of a crisis or natural disaster.

TerraVis will also cater to future electric truck models, generating up to 1000 watts of meaningful power to be used to mitigate range anxiety and act as additional charge energy, with no carbon footprint, storing excess power in its expandable power storage banks.

“This is a system that not only has the power to revolutionise truck use now, but also to carry over into future developments,” said WorkSport CEO, Steven Rossi.

“Everyone is moving towards solar power and renewable energy sources and so is the pick-up truck market. Our system is being designed to, among other things, provide a meaningful source of energy for the new wave of electric trucks.’’

Worksport is now in the process of building investment capital to aid in the next phases of TerraVis development.

The company has just launched a website with the first release of design and application-related details.

WorkSport is presently in discussions with various parties interested in commercial partnerships with the TerraVis technology system, including active negotiations for its first OEM partnership with an EV start-up in the USA that will launch a Pininfarina-designed electric truck.