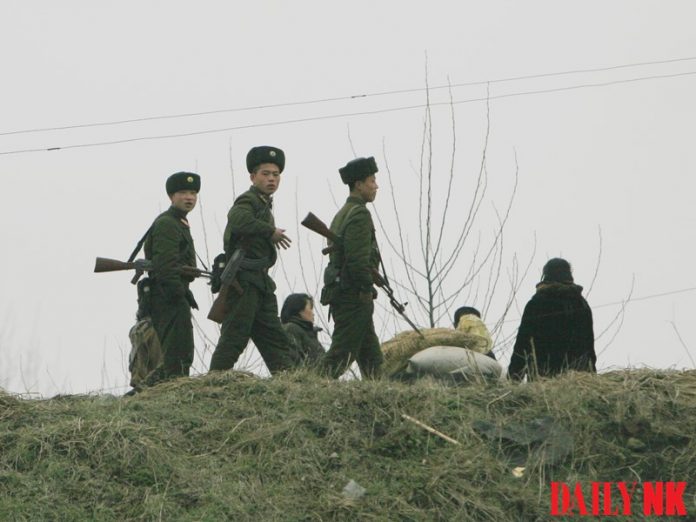 A soldier who snuck past Pyongyang’s tight security after deserting his military unit in Gangwon Province was arrested in the capital city on Aug. 4, Daily NK has learned.

After the return of a North Korean defector suspected of being infected with COVID-19 in late July, North Korean authorities further tightened movement in and out of the city. The fact that the soldier was able to enter Pyongyang without issue caused an uproar in his unit and among city officials.

The soldier, surnamed Choi, was serving in a military engineer company under the 1st Corps in Anbyong, Gangwon Province, when he decided to desert his unit on Aug. 2. According to a Daily NK source on Friday, Choi’s decision to desert his unit was simple: He was angry for being forced to stand guard for six hours straight the evening of Aug. 1 and about being ordered to do the same the following day.

According to the source, Choi left his automatic rifle and combat gear inside his guard house and fled. Later, he entered a nearby private home to change clothes and hitched rides on several vehicles before arriving in the vicinity of Pyongyang.

Upon learning that security around Pyongyang was tight, he hid inside a container on a truck that drove into the city. Choi was arrested near his home in Sangsin, Sosong District, on Aug. 4 by members of the “August 25 Task Force” who were “staking out” his home nearby.

Rather than move straight to interrogating him, the arresting officials placed a priority on testing Choi for COVID-19 at Pyongyang People’s Hospital No. 2 after consulting with central disease control authorities.

The incident led to alarm among Pyongyang officials. Local authorities released a two-page document on Aug. 5 that called on city residents to “faithfully follow safety and quarantine measures in Pyongyang, the revolutionary capital of Chosun [North Korea].” The document directed Pyongyangites to reduce the frequency of their outings and immediately report any “suspicious persons.”

Daily NK further learned that two other soldiers from Choi’s unit who had gone to search for him also deserted.

“The commander of the military engineer unit, a platoon leader, and the unit’s political and security officers, were all arrested because of the desertions,” the source said. “They have been handed over to the August 25 Task Force for individual interrogations.”

Formed on Aug. 25, 2015 to commemorate the “Day of Songun,” the August 25 Task Force investigates various crimes involving soldiers. The unit reportedly has “wide discretion” to both “educate” and detain soldiers for crimes ranging from physical abuse, desertion, rape, and robbery.

Please direct any comments or questions about this article to dailynkenglish@uni-media.net.