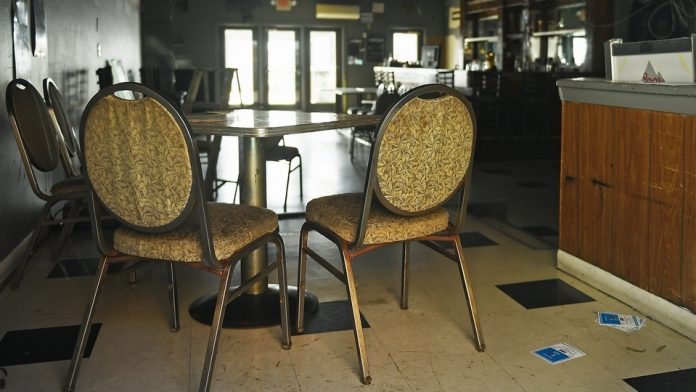 With Connecticut into its first two phases of reopening, many businesses have returned in limited capacities and reinvented themselves, but some southeastern Connecticut restaurants and shops are looking at the landscape and deciding to close for good.

Michael Connery made the decision not to reopen MBAR in Mystic relatively early in the coronavirus pandemic, once he realized how prolonged the impacts would be.

“MBAR, when we created it, was really about creating a communal space, and that just doesn’t work in the era of social distancing,” Connery said of the restaurant and bar, created from a former gas station, that opened in July 2016. “It’s sort of antithetical to everything we were trying to create, with communal tables and things like that, and I personally don’t see the situation changing all that much going forward.”

He wanted to pull the plug rather “than sort of limping along.”

But he said things have been going well at his other business, Saltwater Farm Vineyard in Stonington, and he’s working on creating a second vineyard on Route 49 in North Stonington.

Those plans have been in the works for more than a year, and Connery said the vineyard was planted this spring. He said the pandemic “didn’t really get in the way of what we were doing,” and he hopes to have an event space in a barn within a year.

Elsewhere in Mystic, places that closed include Avanti’s of Mystic Pizza Restaurant and Bartleby’s Café.

The latter announced its permanent closure on Facebook May 13, writing that it “was a very heavy decision and not one we took lightly.” Sift Bake Shop is planning to open a coffee shop and bakery in that location.

Green Marble Coffee House closed in April but the owner was clear her decision was not related to the coronavirus, and Lamplighter Trading Company will open in its place.

New London sees closures on Bank and beyond

O’Neill’s Brass Rail, New London’s only gay bar and an institution known for being welcoming to all, had seen upheaval well before the pandemic.

The bar announced it was closing in January of last year but reopened soon after. It was put on a list of real estate tax delinquents last April, and New London attorney Gregg Wagman took over operations last May.

Wagman said Wednesday he was counting on St. Patrick’s Day this year and the summer season to bring the business back to life. Working with bar manager Scott Cloutier and a crew of employees, he renovated the bathrooms, hired a new cook and put a marketing plan in place.

They had 300 pounds of corned beef in the freezer, but Gov. Ned Lamont ordered bars closed on March 16.

By May, Wagman decided not to renew the lease. The expenses, including rent, insurance and payroll, were continuing without any income, and it didn’t make sense to renew the lease, since it’s unclear when the bar might be able to reopen fully and rebound.

Next door, the second location of NoRA Cupcake Company, which owner Carrie Carella opened in March 2019, has closed, a decision announced on Facebook June 18. Carella noted the pandemic has caused business to drop by about 75% for the foreseeable future.

“We have the ability to open brick and mortar locations because of our other revenue streams like weddings, catered events, wholesaling, and cupcake truck sales,” the post reads. “All of that revenue has been postponed until 2021 or cancelled with no rescheduled make-up dates. Which makes having store fronts difficult to maintain.”

NoRA’s original location in Middletown is not closing, and Carella wrote that she hopes to have the cupcake truck “back on the pier and around town as soon as restrictions lift and we are ready.”

“The COVID-19 pandemic has certainly impacted businesses and brought a lot of them to their knees,” said Felix Reyes, director of New London’s Office of Development and Planning. “That is reality. The hardship is great and livelihoods are at stake. Companies already struggling before COVID, some of the startups, are at greater risk.”

Two chain restaurants that have recently closed locations in the area include Outback Steakhouse in New London and Ruby Tuesday in Waterford.

Open for only a year, Café Otis — the restaurant and bar run out of the original home of Otis Library, across from City Hall — closed at the start of the pandemic.

Sofia LeWitt, a partner in the building’s ownership group, Otis Home LLC, said in May she hopes to find another tenant for the space but admitted it’s a tough time to try to open a new business. Café Otis owner Nancy Isa could not be reached for comment.

Freeport-McMoRan announced this month it will close its copper rod manufacturing plant in Norwich starting late this summer due to a decline in product sales during the COVID-19 pandemic. Nearly 120 workers will lose their jobs.

Monika LaPointe, owner of Create a Cut Hair Designers in Norwich, announced in a Facebook post June 2 that she was deciding whether to renew the lease at the end of June and decided to close the salon, after 38 years.

“When considering all of the factors and safety measures required to adequately protect our staff and clients, we have determined that we could not profitably operate our salon for the long term while under these restrictions,” she wrote. “Additionally, there was no way to reasonably guess how long these restrictions would negatively impact our business.”

In Niantic, Smoochie Bird owner Cindy Lightner wrote on Facebook earlier this month that two months away gave her time to consider what her next steps will be and she has decided to retire. The gift shop has been holding a retirement sale.