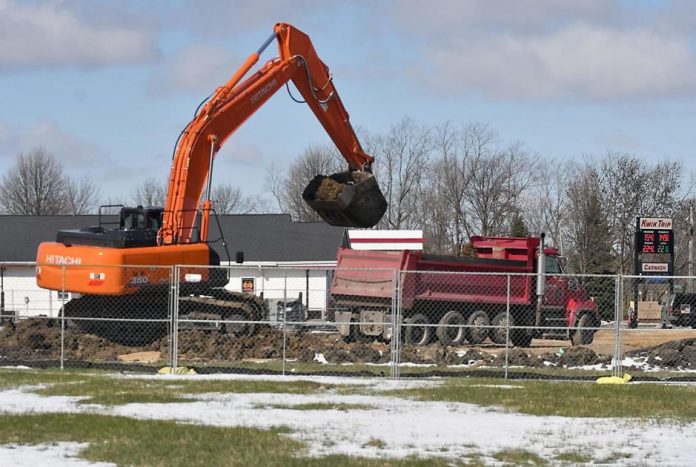 A $7 million truck stop with, for now, no diner. A social-distance-designed coffee shop with no indoor seating. A convenience store more than doubling in size even as the university campus next door is shuttered.

While some planned projects have been put on hold in face of a pandemic-related recession, not every entrepreneur and developer is pulling the plug on the 2020 construction season.

Some are adapting plans and others are moving ahead with a sense of optimism that life and the economy will return to normal in the months ahead.

An ambitious Sibley Parkway winery, for example, is not falling victim to the economic uncertainty.

“We are still planning to go forward with winery construction,” said Paul Neyers, who is building an urban winery with tasting rooms and dining along Sibley Parkway that will transform the long-vacant lot beside and beneath the North Star Bridge. “… While there are current challenges in the hospitality industry, we believe the long-term prospects for our project are worth the investment.”

The Minnesota Department of Employment and Economic Development recently approved a $202,000 grant for the winery to help cover the added costs of redeveloping a former industrial site.

“The DEED grant was an important piece,” Neyers said.

Other projects are designed in a way that allows commerce to continue even if social distancing measures remain for the foreseeable future. A tiny Caribou Coffee shop adjacent to Mills Fleet Farm on Highway 22 appears to be approaching construction — although with a pandemic-resistant design.

A floor plan submitted to the city this month for the 583-square-foot Caribou shows a drive-thru window, a walk-up window on the opposite side of the building and no interior seating — at least in the near term. There are a couple of outdoor patio tables shown.

Mankato City Manager Pat Hentges said well-made mochas and lattes appear to be an essential service for many people, even in a time of stay-at-home orders and social distancing.

“Kind of gauging the lines you see at Starbucks and backing up into the streets … there are a lot of ‘double-latte, splash-of-that’ kind of people out there,” Hentges said.

And a $2 million Kwik Trip to replace the smaller existing store is under construction at the corner of Stadium Road and Monks Drive even as the adjacent Minnesota State University campus is without its 14,000 students, who are now taking classes online.

Even so, the 3,900-square-foot Kwik Trip appears to have no shortage of customers from apartment buildings and south-side subdivisions seeking groceries, snacks and other necessities.

“Traffic is down in gas, but it doesn’t seem to be going down in customers,” Hentges said. “There’s still a lot of people out there that use it for convenience for groceries.”

So La Crosse, Wisconsin-based Kwik Trip is pushing ahead on the new 8,300-square-foot store, maybe in part because it will now easily be in place before a Hy-Vee Fast and Fresh store that was announced a year ago for the next parcel to the east — a project that appears to be on hold.

Hentges isn’t surprised the large truck stop on Mankato’s far northeast side is moving steadily toward construction this year. There’s a well-documented shortage of places for truckers to take required breaks in the Mankato area, and the facility planned for the intersection of Adams Street and Blue Earth County Road 12 is just across Highway 14 from the Walmart distribution center.

The two-story truck stop, being developed by Steve Freyberg, has space for a first-floor restaurant, but the diner is listed only as a future amenity. Initially, the facility will have a convenience store, fueling stations, parking for scores of trucks and a second-floor lounge for drivers, including a laundry and multiple shower rooms.

Across County Road 12 to the west, Harrison Trucking is continuing to move toward a fall construction of a nearly 70,000-square-foot sales and service business on 24 acres north of Adams Street.

“The owner/developer is anxious to move forward with the project, based on the likelihood of constructing a series of apartment projects in the area,” Hentges said. “It seems to be a sound market yet in that area.”

Prior to the pandemic reaching the United States and the resulting economic nosedive, 2020 was looking to be an active year for construction in Mankato. Talking to contractors, the amount of work continues to be promising in coming months.

“There seems to be a significant backlog of work to carry them through the summer. … So they’re very optimistic. And that represents really a significant part of our economy — the building trades,” he said. “However, there is a fair amount of uncertainty going into the fall and what their workload might look like to carry them over the winter months.”

A couple of potentially major developments are not proceeding at this time, both involving unnamed companies because discussions with city officials were in preliminary stages, according to Hentges. One local manufacturer was planning a 29,000 square-foot expansion and the possible construction of a 100,000-square-foot warehouse. The second was a manufacturing firm that approached the city during the winter about plans to develop a 100,000-square-foot facility in a Mankato industrial park.

“There’s a lot of uncertainty, but people still have to live places,” he said. “And we’ll still have trucks moving things around — if anything, for toilet paper.”