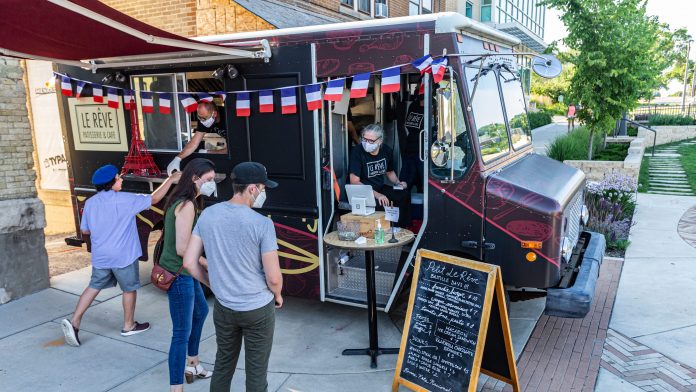 The economic impact of the COVID-19 pandemic is still being felt by many businesses. Ad some businesses are getting creative when it comes to ways to reach customers in a new world of face masks and hand sanitizer.

Food trucks, tents, sidewalk sales and outdoor service are just some of the ways businesses in Wauwatosa are now reaching out to their customers.

City programs, including Tosa Restarts, are helping businesses get approval for new ideas they have to safely serve customers. And many businesses are using social media now, more than ever, to let customers know that they’re still open for business.

“It’s important for people to get creative because they don’t want to run the risk of getting shut down again,” said Michelle Haider, executive director of the Wauwatosa Village Business Improvement District.

Le Rêve Patisserie & Café, in the Village area of Wauwatosa, is now operating a food truck during select days of the week.

Instead of driving the food truck to local farmers markets or other public spaces, it’s pulling the truck up from the back alley of the restaurant to the edge of Root Common Park — a .01-mile trip.

Manager Amy Duncan said the restaurant started to think about the idea while it was shut down and not able to serve customers in person. They were quickly in communication with city staff about their plans.

Normally, it would take months to get a food truck approved. But Duncan said the city of Wauwatosa worked with them to approve it, and they were able to get the food truck up and running in just a few weeks.

Duncan said they wanted to allow customers a new way to quickly order Le Rêve food to go, and in a safe environment.

“That way, there’s still an opportunity for people to get Le Rêve, and they can take it and go socially distance however far they need to,” Duncan said.

The food truck menu includes a frenchie burger, macaron ice cream sandwich, frites and more. After customers get their food, they can leave, or even sit at tables the restaurant placed at the nearby park.

“It’s very exciting to finally get it set up on the street and open it up,” Duncan said.

Duncan said this provides the restaurant with another option to serve customers. Along with the food truck, the restaurant has since opened the dining room at limited capacity, and offers customers the regular menu to go, as well as a family-style menu to go.

“We are just doing our best to continue to offer all of the best of Le Rêve  in all of the safest ways people want to enjoy it,” Duncan said.

Michael (left), Catherine and Tom Warren of Alioto’s in Wauwatosa put up a tent in the back parking lot of their restaurant so more customers can feel safe when dining-in at the restaurant. (Photo: Evan Casey/Now News Group)

Michael Warren, a manager at Alioto’s, said the restaurant contacted the city in April about the possibility of opening a tent to seat customers in the back parking lot of the restaurant, 3041 N. Mayfair Road.

“We realized there were an awful lot of hurdles to go through,” Warren said.

But this time, that wasn’t the case, thanks to the Tosa Restarts program.

“We put the proposal together, and they sent us back all the forms. We sent the forms back to one person, and then away it went,” Warren said.

Tosa Restarts is aimed at allowing businesses to quickly — in 72 hours or less — implement new strategies to reach customers. It also waives or reduces some fees for some of those activities.

Warren said Alioto’s had approval for the tent in less than 72 hours.

The eatery held a Fourth a 4th of July party under the tent, with some live bands playing music.

As of now, the tent is approved until August, but Warren said if it continues to go well, the restaurant will ask the city to approve it for longer.

“The City of Wauwatosa bent over backwards to help us,” Warren said. “It was awesome, truly awesome.”

Rocket Baby Bakery on North Avenue has decided to keep its indoor cafe closed, but it’s still doing to-go and delivery orders for its loyal customer base.

Trenholme said this works well for the bakery, since the neighborhood is very walkable.  And right next to the bakery lies the 69th Street Plaza, which has large picnic tables that some customers use after they order.

“It’s been good to offer that again and have people engage with us the way they used to,” Trenholme said.

Trenholme also said the business is staying active on social media in an attempt to engage with their customers.

“We need them, and everyone needs to keep on supporting businesses, otherwise I don’t know how we’re going to get through this,” she said.

The Flannel Fox, 7602 Harwood Ave., recently held an indoor sidewalk sale for customers. The owners of the new business say they’re looking to expand the sale to the sidewalk outside of their business soon. (Photo: Submitted)

The Flannel Fox, 7602 Harwood Ave., first opened its doors to customers in late May.

It recently held an indoor sidewalk sale during the Makers Market of the Tosa Farmers Market. A new business in Wauwatosa, The Flannel Fox said it’s vital for it to reach new customers to stay afloat during this time.

Melyssa Grundle, who co-owns the shop with her fiance, Mark Bauer, said they’re looking to put more clothing racks on the sidewalk outside of their business soon.

“We are really hoping that by having a sidewalk sale and being able to draw and get people to see it on the street and pique their curiosity, that it draws their attention and brings them into the store,” Grundle said.

Bauer also said the a sidewalk sale helps get rid of older inventory.

“Having it on a sidewalk sale, someone gets a really awesome deal, and I reduce my inventory as well,” Bauer said.