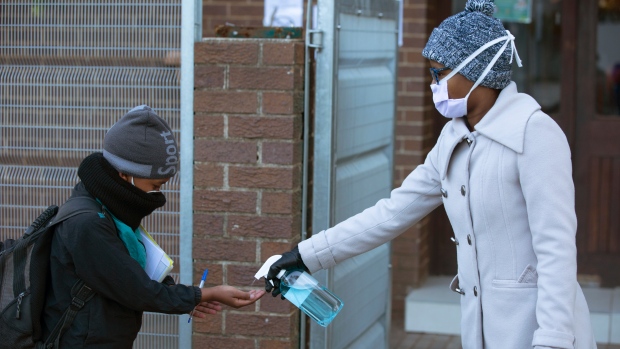 JOHANNESBURG — While thousands of South African students are returning to school Monday after nearly four months when their classes were closed to combat the spread of COVID-19, authorities are debating a return to more restrictive measures because of a surge in cases.

In neighbouring Zimbabwe, at least 12 nurses were arrested after demonstrating against their working conditions, complaining that they do not have adequate protective gear to safely treat COVID-19 patients.

South African students in grades 6 and 11 started classes Monday, as the second stage of a phased reopening of schools. The first group of pupils, from grades 7 and 12, returned to classes last month.

Returning learners were required to produce indemnity forms signed by their parents granting them permission to resume classes.

South Africa’s government last week won a legal challenge permitting it to proceed with reopening schools. The lawsuit had said that schools should remain closed because of the danger of the disease spreading among learners and teachers.

However, in recent days the government has postponed plans for further grades to return to class amid a quickening speed in the rise of confirmed COVID-19 cases. South Africa had 196,750 cases as of Monday, more than 40% of all the cases reported by Africa’s 54 countries. South Africa has recorded 3,199 deaths.

In Zimbabwe police Monday arrested at least 12 nurses who were protesting against low salaries and lack of adequate personal protective equipment at a time the country’s Covid-19 cases are rising.

Thousands of nurses working in public hospitals stopped reporting for work in mid-June, part of frequent work stoppages by health workers who earn less than $50 a month and allege they are forced to work without adequate protective equipment such as gloves and masks. Police have been deployed to stop protests by nurses and doctors in recent months.

On Monday, dozens of nurses wearing masks and their white and blue uniforms gathered for protests at some of the country’s biggest hospitals in the capital, Harare, and the second-largest city of Bulawayo.

Zimbabwe’s coronavirus cases have been climbing in recent weeks, mostly recorded at centres where people returning to the country mainly from neighbouring South Africa are kept in mandatory isolation. The country had recorded about 700 cases of coronavirus infection and 8 deaths by Monday.

Nurses sang and chanted slogans at hospital premises, carrying placards that read “Nurses lives matter,” “We have been reduced to nothing” and “We want our salaries in U.S dollars.”

After some running battles, police arrested some of the nurses and shoved them into a truck at Harare Central Hospital. Zimbabwe Lawyers for Human Rights, which is Zimbabwe Lawyers for Human Rights, an NGO which is representing the nurses, said “at least’ 12 nurses were arrested and have now been taken to a police station in the poor suburb of Mbare. They have been charged with contravening lockdown rules, the organization said.

The Zimbabwe Nurses Association described the arrests as the “clearest evidence” of the government’s unwillingness to improve their conditions.

“The attempts to strangle our genuine voices through force is nothing new … however we have lost our earnings through slave wages and so we have nothing more to lose,” said the nurses association in a statement.

Zimbabwe’s health workers, like most government employees, argue that their salaries are being eroded by inflation, now at more than 750%, as the once-prosperous southern African country battles its worst economic crisis in a decade.

The frequent strikes by health workers are a further strain on a weak public health system that was already in the intensive care well before the outbreak of coronavirus.

Families of patients are expected to provide drugs and, in some cases, bring buckets of water as Zimbabwe’s once-envied health care system reflects the southern African nation’s general collapse.

Now more than ever, social services needed in the region |...