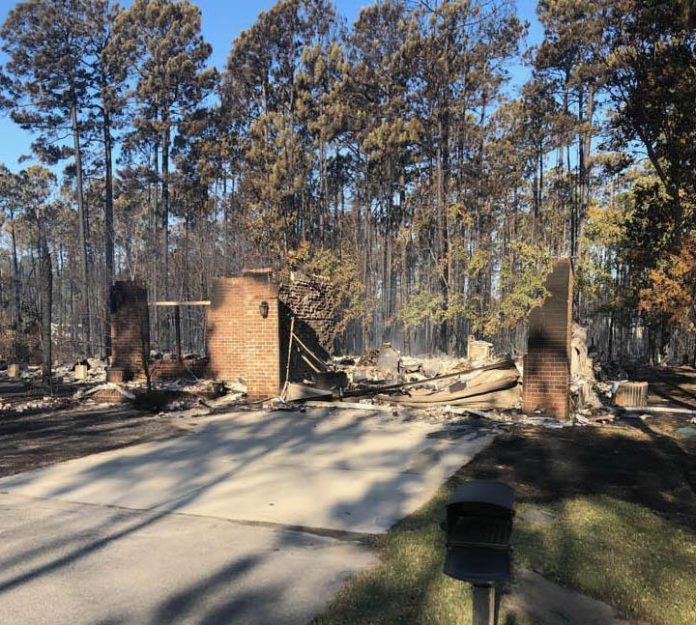 “It’s down to just the foundation and the brick in the front. It’s just rubble now. My house and the house adjacent to mine, to the right of it, southbound, is also leveled.”

Brenden Shipes has only seen photos of his former Santa Rosa Beach home.

His was one of more than 30 structures that burned down in a large wildland fire that started Wednesday night and continues to burn in South Walton.

“It’s down to just the foundation and the brick in the front,” Shipes said. “It’s just rubble now. My house and the house adjacent to mine, to the right of it, southbound, is also leveled.”

Shipes was moving furniture, driving down U.S. Highway 98 when he first noticed the fire that night. He and his roommate, Kaleb Cromer, watched from the road until the flames split into two, crossing the power lines, he said.

They watched as several Walton County Sheriff’s officers knocked on doors asking people to evacuate – including them. That was when Shipes started to worry.

“When we were loading up the truck, there was heavy ash debris falling, charcoal ash,” Shipes said. “The cop was just sitting there waiting, making sure we got out before anything happened. My neighbor stayed there until the fire had gotten to the back of his house. My landlord has a house about two lots behind mine and I’m pretty sure it’s gone, too. He just bought it last month.”

In five minutes, Shipes wrangled up his 3-year-old pitbull Murphy, and Cromer loaded up clothes and guns. They left everything else behind.

The two drove south on Thompson Road, and were told by a friend that the roads were fine. The fire nearly melted the paint off his truck.

“Once we went southbound, there were pocket fires on both sides of the road,” Shipes said. “Two houses were on fire. There was a 75-foot flame wall on the hilltop right across from the cemetery and we had to drive through that. Once we got through it, we looked back and the whole entire road was completely engulfed in flames and smoke. We could feel the heat through the truck.”

The two stayed with Cromer’s girlfriend in Niceville last night. Many people have offered them places to stay, he said.

“We haven’t really gotten to lay eyes on it yet,” Shipes said. “I’ve only seen pictures of it yet. Right now, it’s just straight up shock.”