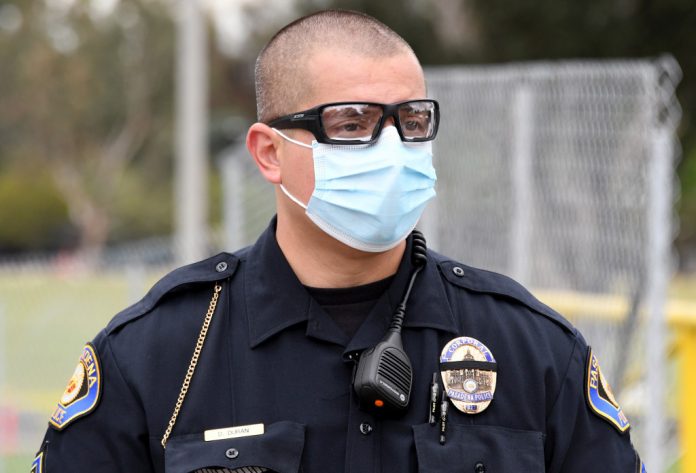 Cities across Southern California are spending tens or even hundreds of thousands of dollars to buy masks, gloves and other personal protective equipment to protect their first responders and staffers during the coronavirus pandemic.

But exactly how much they’re spending – and whether or not they’re paying fair prices for life-saving items that are in short supply – sometimes remains unclear. Because cities have declared states of emergency, they don’t have to put these rushed purchases out to bid or get approval from city councils.

Cities obviously didn’t plan for pandemic-related expenses last year when they made their 2020 budgets. And most cities aren’t big enough to qualify directly for federal stimulus money to help cover coronavirus-related costs.

So, even as tax revenues plummet in the pandemic economy, cities are left hoping they’ll be reimbursed for PPE directly from the federal government or that they’ll get a share of the federal stimulus money already approved for counties and the state.

“We had our budget in order. Everything was looking good,” Santa Ana Mayor Miguel Pulido said. “And now, boom, we got hit by a Mack truck going 100 mph.”

Nine out of 10 cities in California have had to purchase PPE and other unanticipated COVID-19 expenses, according to the League of California Cities.

The League reports that some 12% of all California municipalities have spent $500,000 or more to help control the pandemic, including costs to buy PPE, set up technology for remote working, to pay staff overtime and to support residents.

In Southern California, municipal spending on PPE varies wildly, with no pattern or correlation to the size of the city in question.

San Bernardino, for example, which has 215,000 residents, has spent more than $20,000 on PPE supplies including face shields, masks, gloves, bandanas, hand sanitizer and isolation gowns, all of which is used by staff members in every department, according to Assistant City Manager Rebekah Kramer. That spending equates to a little more than 9 cents per resident.

Santa Ana, which as 332,000 residents, has spent $126,054 on PPE gear for city employees, including gloves, masks, coveralls, face shields and goggles and no-touch thermometers, according to spokesman Paul Eakins. That’s about 38 cents per resident.

Meanwhile, the city of Pasadena, population 141,000, has spent about $223,000 on such items for city staffers, according to spokeswoman Lisa Derderian. That’s about $1.58 per resident.

The financial ecosystem of buying and selling pandemic-related supplies is new. In many cities, staff members are piecing together orders for PPE directly from international suppliers, or they’re turning to local importers who have recently pivoted to supplying protective gear. Sometimes, cities turn to nearby county health departments when they can’t track down goods.

In this scramble, reports of price gouging by PPE suppliers and scammers are rampant. And since cities don’t have to put these purchases through standard procurement processes, the lack of oversight could open the door to questionable deals.

Some dealers say they’re well aware of the potential problems.

Mark Newgent, who owns a medical supply business in Irvine, said friends who are local politicians have told him their governments can’t buy from his company even though they trust him to get good products at fair prices because they know it would appear improper.

City staffers charged with purchasing say they’re trying to strike a balance, getting gear as quickly as possible while finding the best deals they can.

“We are trying to make sure we order just what the need would be and not be excessive,” said Paul Catsimanes, emergency services manager for Mission Viejo.

Catsimanes’ city has spent nearly $12,000 for face masks and hand sanitizer for its employees, first responders and local healthcare providers, such workers at senior assisted living homes. Mission Viejo paid $3.14 each for KN95 masks and $6.95 to $8.95 for reusable cloth masks, prices that are in line with the going rate for those products purchased in bulk.

Finding items in stock and dealing with extended delivery times have been the biggest challenges in acquiring supplies, said the city of San Bernardino’s Human Resources Director Edelia Eveland, whose department is handling those transactions. The city has bought PPE from Amazon, Home Depot, Sam’s Club and other companies.

“We have been using a broad spectrum of vendors,” Assistant City Manager Kramer said. “It has been difficult to find these materials due to demand and supply chain constraints.”

Recently, an order from Pasadena was delayed after Gov. Gavin Newsom exercised his emergency powers and stepped in to get PPE to healthcare workers, according to Pasadena spokeswoman Derderian.

“The vendors notified us the shipment would be delayed because the initial batch was going to the state,” she said.

Santa Ana has purchased goods from 15 different vendors, from Amazon to The Paper Company in Irvine. Though the city has sourced most of its equipment, Eakins said Santa Ana did turn to the county to get 120 N95 masks.

Ontario has spent about $135,000 on thermometers, isolation gowns, gloves and about 3,100 protective masks. Those purchases have been made from a dozen vendors including 3M and the Chinese American Young Entrepreneurs Association, said city spokesman Dan Bell. Other local companies, such as Gold Crest Industries, which recently switched from making products such as patio cushions and cloth umbrellas, to masks, donated some supplies to the city.

When the outbreak started, the city of Corona was concerned that its PPE supply was running short and vendors were either out of stock or extending delivery dates, according to city spokeswoman Cindy Solis. So the city turned to Riverside County which, according to Solis, provided necessary protective gear until Corona’s usual vendors could replenish their stock. Now, she said, the city has adequate supplies.

In San Bernardino County, 24 fire agencies have created an XBO Regional Incident Management Team, an action usually reserved for battling large wildfires. They’ve done this to maintain services and to secure protective gear during the pandemic. Spokesman Steve Tracy said the team has distributed more than 5,000 boxes of surgical gowns and more than 10,000 masks, gloves, containers of hand sanitizers, along with other protective equipment, to 1,977 firefighters and paramedics.

“This is the same way we handle supplies during national disasters and wildfires,” Tracy said. “There is always one central ordering point. It also helps us with federal assistance reimbursements.

“We have items on back order, but haven’t run out,” he said.

“The demand is decreasing as we smooth out the curve (of the virus).”

The amounts the team paid to buy the equipment were not immediately available.

The team got their PPE through the Inland Counties Emergency Medical Agency, which in turn got the items from the San Bernardino County Office of Emergency Services.

And the county got some of its stuff from the Strategic National Stockpile.

Established in 1999, the national stockpile has 200 employees stationed at warehouses in secret locations scattered throughout the U.S. It is designed to serve as a stopgap for state and local health agencies during national emergencies, supplying things like antibiotics, medications, medical supplies and other equipment.

But cities are supposed to work through their states to get PPE from the national stockpile. Early in the pandemic, many states were getting only a fraction of the gear they requested. Then, in early April, the stockpile was depleted.

As cities continue racking up bills to buy PPE, they’re hoping funds will be coming in to keep them afloat in the tough fiscal year ahead.

The League of California Cities says nine out of 10 California municipalities expect to face budget shortfalls tied to the pandemic that will lead to service cuts or furloughs and layoffs. Statewide, they’re looking at a combined revenue shortfall of $7 billion.

Local governments are eligible to get reimbursed by the Federal Emergency Management Agency, or FEMA, for emergency protective measures, such as buying medical supplies and disinfecting facilities. But FEMA Administrator Pete Gaynor wrote in a letter March 27 that cities shouldn’t wait on PPE from the federal government.

“Take aggressive action now to source your own,” Gaynor said.

But only cities with populations of 500,000 or more can get any money directly from the federal government, meaning that in Southern California only Los Angeles and San Diego qualified. Most local cities are left hoping that either the state or the county will eventually pass along a share of their funds to close city budget gaps that are growing by the week.

“They’re basically telling us, ‘Spend the money first and then give us an invoice seeking reimbursement. Then we’ll determine if that expenditure qualifies or not,’” Pulido said.

For Mission Viejo, Catsimanes said he expects the federal and state governments to reimburse the city for its PPE purchases. But he said the city is not basing its decision on whether it will be reimbursed or not.