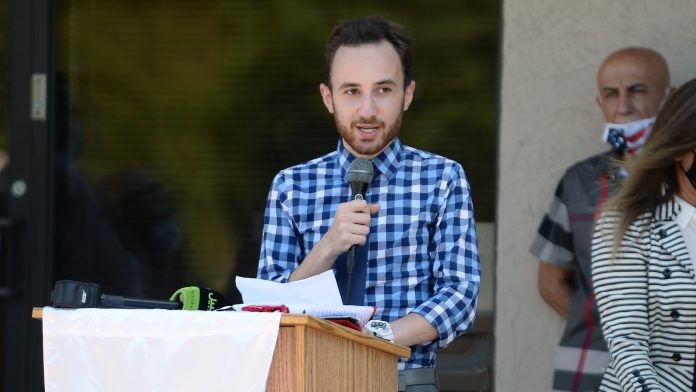 Southfield — Responding to last week’s devastating blast in Lebanon, an Oakland County nonprofit sent off a semitrailer of medical equipment and other supplies Tuesday to aid recovery and relief efforts.

Majd Faraj talks about the medical supplies being sent to Lebanon to help people who were injured in the Aug. 4 explosion in Beirut. (Photo: Clarence Tabb Jr., The Detroit News)

The 40-foot truck filled with surgical gear, crutches, clothing and other necessities is the first of five to be delivered from the World Medical Relief Center to Rafik Hariri University Hospital in the wake of the Aug. 4 explosion in Beirut. The blast destroyed Beirut’s port, damaged much of the Lebanese capital and killed at least 160 people. Thousands of others were injured.

Majd Faraj, an Oakland University medical student from Beirut and center volunteer who organized Tuesday’s shipment, said Lebanon was struggling even before the devastation caused by the blast.

“Everybody in Beirut has been heavily affected by the economic crisis that Lebanon has been passing through, and the pandemic, and now you have the explosion to add,” he said. “So they are in dire need of this.”

The blast is believed to have been caused by a fire that ignited a stockpile of highly volatile ammonium nitrate, which had been sitting in Beirut’s seaport since 2013.

Farah Afra of Dearborn was among those who went to the center Tuesday to see the relief shipment off. Afra, 25, who has family members in Beirut, says no one in the city has escaped the impact of the blast.

“My sister’s house is in ruins,” she said. “I know people who died and the hospitals are actually taking COVID patients outside in order to treat the people injured from the explosion.”

Faraj said the equipment is being donated by Metro Detroit hospitals, with the first shipment’s value totaling $500,000.

Mike M. Baydoun, Chair Board of Directors World Medical Relief, talks about the $500,000 of medical relief that will be sent to Lebanon. (Photo: Clarence Tabb Jr., The Detroit News)

Faraj said the container will be sent by ship because of restrictions on flying because of the COVID-19 pandemic. He expects the supplies to reach Lebanon in about two weeks, and the next container to be sent from Southfield on Friday.