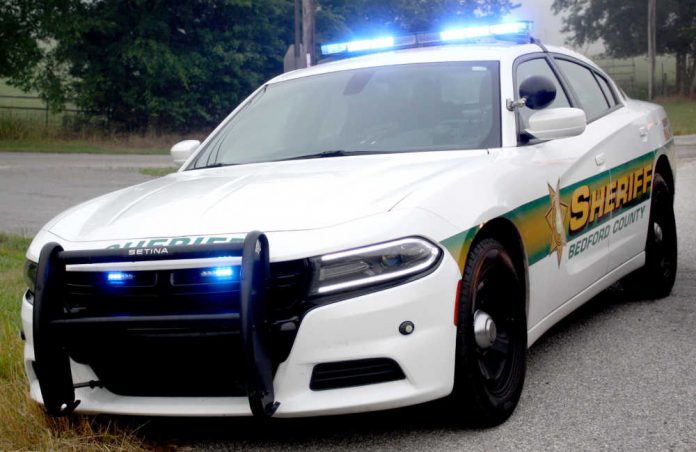 A man speeding around Bedford County on a four-wheeler is suspected of going on a burglary spree Tuesday, breaking into four homes and stealing a gun and puppy, throwing out the puppy at a store, almost crashing twice and outrunning a pursuing officer.

The Smith & Wesson 9mm handgun and the puppy were stolen from an unlocked residence in the 600 block of Rabbit Branch Road, but the dog was returned to its owner later in the afternoon. All-terrain vehicle tracks were found in the driveway by a Bedford County deputy.

A suspect described as a bigger white male with a full beard drove an all-terrain vehicle into the parking lot of the Shell convenience store on Union Street around 2 p.m. and asked a clerk to watch the puppy for awhile until he returned. The man threw the puppy in the parking lot and, cursing, abruptly sped away after a Shelbyville police officer drove by, a clerk said.

The clerk told a deputy the store manager told her she couldnt keep the dog inside so she turned it over to a friend. The suspect arrived later in a pickup truck, accompanied by a woman, and asked the clerk if she still had the dog. The dogs owner said he had posted on Facebook about the incident; the clerks friend saw the post and brought him the puppy.

The incidents were reported at homes in the 100 block of Higgins Road and 1800 block of Cortner Road and a shop building in the 400 block of Philippi Road, the Bedford County Sheriffs Office said. Nothing was immediately reported missing from any of those locations.

Door frames were seriously damaged and dead bolt locks were broken at two locations. Footprints from Nike Shox shoes were detected at two of the locations by the BCSO and a neighbor saw a black and white all-terrain vehicle leaving the Philippi Road building around 2-2:30 p.m., where security video showed a door being opened at 2:18.

A four-wheeler and driver matching the descriptions of the suspect was clocked at 62 mph in a 40 mph zone on Depot Street at Coney Island Road by Sgt. Tory Moore of the Shelbyville Police Department at 7:10 p.m.

The four-wheelers driver refused to stop for Moore, was almost hit by a truck, slid in front of an oncoming car and was last seen driving through a field off Garrett Road.

A bystander told police the ATV was seen on Anthony Road headed toward Madison Street. Bedford County Communications Center received a report moments later of the ATV being driven recklessly on State Route 437 (the Shelbyville bypass).

The BCSO said the suspect was still at large Wednesday.

Suspect shot and killed by deputies