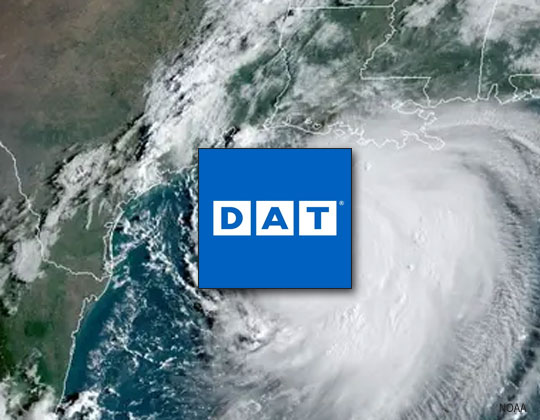 Activity on the DAT MembersEdge load board jumped last week as shippers and logistics companies began to reposition freight ahead of two major storms, Laura and Marco, which are expected to make landfall on the Gulf Coast this week.

The number of loads posted on the MembersEdge load board increased 9% and truck posts ticked up 2% compared to the previous week, pushing national average spot rates to their highest levels since July 2018.

These rates include a fuel surcharge and are rolling averages for the month through Aug. 23.

As of Aug. 25, Laura was forecast to reach the northwestern Gulf Coast along “Gasoline Alley.” This 375-mile stretch between Galveston, Texas, and New Orleans is home to the single largest concentration of oil refineries and chemical plants in the country. In the weeks after Hurricane Harvey hit the Houston area in August 2017 and caused refineries to shut down, diesel and gasoline both rose more than 15 cents a gallon.

FEMA approved a preemptive disaster declaration ahead of Laura making landfall. To subscribe to get updates about FEMA loads and emergency freight on the spot market, visit here.

Spot van rates are at the highest level seen in the past five years for mid-August and up 25% year over year. DAT’s Ratecast predictive model expects van rates to plateau in the $2 to $2.05 per mile range over the next four weeks.

Average spot reefer rates were higher on 37 of DAT’s top 72 lanes by volume on a 10.7% decline in the number of loads moved on those lanes. Rates were neutral on 26 lanes and lower on seven lanes compared to the previous week.

Harvest shipments are winding down

The U.S. Department of Agriculture reported that seasonal truckloads of domestic produce decreased by 3% last week and 12% for imported truckload shipments, which is just under 2,500 fewer loads of produce compared to the same week in 2019.

As strong as spot market demand and rates have been recently for vans and reefers, the longer-term outlook for flatbeds is more bullish. As a weekly average, the national flatbed load-to-truck ratio was 42.2, touching above 40 for the first time since the week of July 21, 2018. That’s on the strength of new home construction, which jumped up 23% in July, according to the U.S. Census Bureau. Building permits also rose by 19% in July, fueled by low interest rates. All of these are positive indicators for future building activity, which will create more demand for flatbeds.

Flatbed volumes did drop in the Southeast, so there are some signs of demand cooling in the short term, but if you look at supply and demand charts in DAT MembersEdge or DAT Power, you can see that those markets are still hot. The declines from the lumber markets in that region are most likely a result of some of those depleted inventories having been replenished. But long term, the construction sector still proves to be resilient in the face of the pandemic, which is a strong sign for flatbed freight going forward.

These rates represent averages from last week and this week will certainly be different. Negotiate the best deal you can get on every haul, and look at the rates and load-to-truck ratios in MembersEdge to understand which way the rates are trending.

For the latest spot market updates related to COVID-19, visit DAT.com/industry-trends/covid-19 and follow @LoadBoards on Twitter. You can post comments on the DAT Freight Talk blog or on the DAT Facebook page. You can listen to the DAT MembersEdge report every Wednesday on Land Line Now. If you’re a company driver, DAT has a free app called DAT Trucker. It shows where to find fuel, truck stops, weigh stations, Walmart stores, and other important locations while you’re on the road. It’s in Google Play or Apple’s App Store.