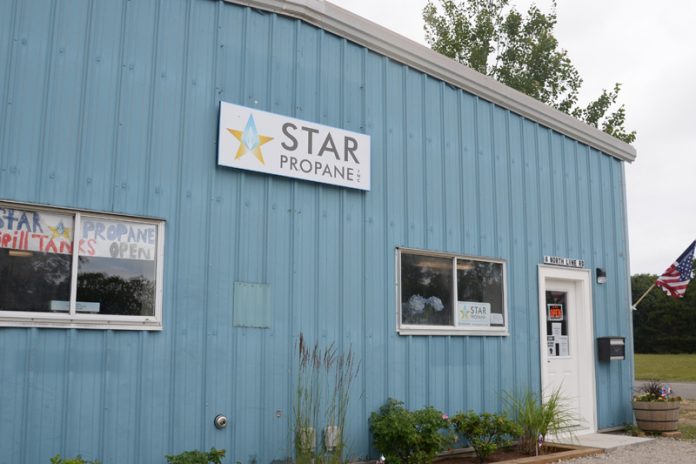 Heath Estrella is looking to provide unparalleled service to the Vineyard community and continue his grandfather’s legacy with his new propane company, Star Propane.

The new company, which is located at 4 North Line Road in the Airport Business Park, opened its doors to customers on June 1.

Ever since Manuel Estrella started Estrella Gas out of his home office in Vineyard Haven in 1967, the family has been providing propane to Islanders and building close relationships with customers.

According to Heath, Star Propane is all about continuing what his grandfather started decades ago — catering to Islanders’ propane needs and forming rapport with every client. “He was really known all around the Island, and he knew all of his customers very well,” Heath said. “We want to keep that tradition going.”

Over time, the dynamics of the propane industry changed, and portable cylinder tanks were replaced by bulk deliveries with a tank truck, so Manuel decided to sell the business in 1984 to a large propane company.

Heath’s father took a position as the general manager of that new company, where he could further his experience in the propane industry, according to Heath.

Five years later, Heath’s father decided to start his own propane company, and Vineyard Propane was born in 1989. Heath began working part-time while in high school and college, and full-time when he graduated from college in 1996.

Over the many years Heath worked for Vineyard Propane and managed the business, he said, he gained a high degree of experience dealing with customers new and old, and formed a tight-knit network with employees and clients.

In 1999, Heath’s father decided to sell to a large company once again. Over the next 20 years, Heath and his father worked side by side for that company, growing the business like it was their own.

“We really took on a lot and built that company up, but after a while I started to wonder, ‘If I can do this for someone else, why can’t I do it for myself?’” Heath said.

Heath left Vineyard Propane and started Star because he wanted to continue his grandfather’s legacy and use all his experience to create a customer experience that was second to none.

“What is the point of managing a company and dealing with all the stress and headaches if you don’t own it?” Heath said. “I knew we could provide something unique to people, with a more personal experience.”

According to Heath, Star Propane has been getting relatively consistent business, with customers ordering tank refills or repairs every day (and some are switching over from other propane companies on-Island). But he said the era of COVID-19 has put a strain on all newly formed businesses that are looking to grow their clientele base.

“When you really think about it, what if people didn’t get back to work this summer?” Heath asked. “You are always just hoping everyone has made enough money to pay their gas bills for this year.”

Heath explained that while many businesses gear up for the summer as their busy season, propane companies make the bulk of their income in the cold winter months. “My busy season is most people’s slow season, and what most people would consider the busiest time of the year is my slowest time,” Heath said.

Being in the propane industry on Martha’s Vineyard, according to Heath, has given him a unique perspective on working alongside other propane companies.

“I’m all about working together. We are in the same industry, so obviously it’s healthy and friendly competition,” Heath said. “Especially right now, who knows when we might need help, or when another company might need help. We are all one community here — you wash my back, I’ll wash yours.”

Currently, Star Propane is operating with one propane delivery truck, with another delivery truck on the way. The company also has a couple of service trucks, so keep an eye out for the blue and gold star logo driving around the Vineyard this season.

Heath said he is optimistic about the coming months, although it is difficult to anticipate what the fall and winter have in store for Martha’s Vineyard. “I think just like everyone else, we are hoping for some positive news. We are doing good now, but hopefully things will get better before the heating season rolls around,” Heath said.

Portsmouth man says he acted in self-defense in civil suit over...