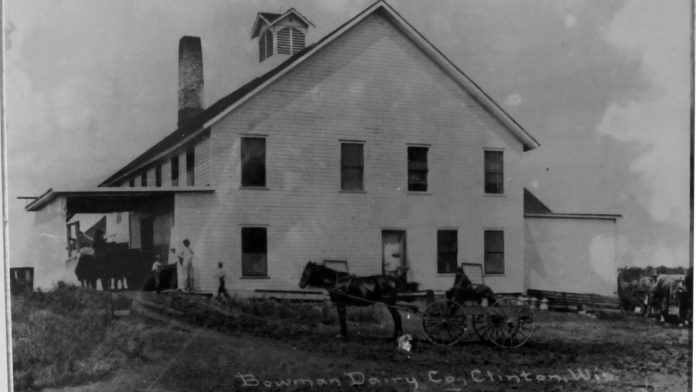 There always seemed to be a comfortable rhythm and flow to the everyday happenings on the Johnson dairy farm in the 1940s and ‘50s.

Each day had a certain sameness, i.e. early rising, milking the cows, followed by eating breakfast, and then hauling 12 to 14 10-gallon cans of Grade A milk to the Bowman Dairy Company in Clinton.

The Dairy was a fluid milk receiving plant bought by J.R Bowman and his brothers of Chicago in 1920. The Bowman family had started out in the St. Louis area but had moved their headquarters to Chicago to supply fluid milk and eggs, which were delivered to the urban residents. The Clinton plant held the distinction of being one of the first that had expanded into the state of Wisconsin.

Over 150 farmers in our area hauled their milk to Clinton, so it was really disheartening and jarring for families when they were notified that the Clinton factory would be closing October 8, 1955. However, it was not a total surprise to the farmers; since they had watched 4 Borden plants (remember Elmer and Elsie?), a Dean plant, and the Darien Bowman plant close in the last few years.

Our nearby neighbor, Wally Hahn, president of the Clinton Pure Milk Association, farmer, and district PMA officer called the meeting to discuss the issues and to offer support.

It was proposed that after closing, Bowman would still take bulk milk at the Capron, Illinois plant, but those who continued to send milk in cans would have to transport it to Sharon, Wisconsin.

Grandpa Herman and Dad had anticipated the change and had gone ahead and installed a 650-gallon flat-top stainless bulk tank in the milk house prior to the closure. The men and we kids still needed to bucket the milk to the strainer and the tank; however, the changeover did eliminate the cement receptacles in the milk house which were filled with ice cold well water and used for cooling the milk in the cans. The bulk tank also eliminated the backbreaking work of lifting the cans in and out of the truck and the chilly water. A bulk truck would pick up the milk every other day at the farm and transport it to Capron, Illinois.

Change is always difficult and local farmers were not the only ones disappointed by the closure. My brother David and I always looked forward to riding with Dad to the milk factory during the summer months, or even before we started attending school.

We three would pile into the truck and head up the road to Clinton. Much to my chagrin, I was the one selected to straddle the gear shift since I was the youngest.

Our father liked to spend the 5 mile journey to Clinton educating us kids in the critical issues of life.

We sang together and learned the words to “Barney Google,” “Yankee Doodle,” “I Yust Go Nuts at Christmas,” and “How Much is that Doggie in the Window.” Dad also felt that it was important for us to learn how to spell the two words he had misspelled in the county spelling bee competitions for which he had qualified. They were alf-alf-a (alfalfa) and e-t-I-q-u-e-t-t-e (etiquette). Certainly, important topics for all to learn, but we did learn them.

Father would drive the Ford pickup up the cindered driveway to the first flapped door of the Bowman Dairy plant each morning. He would slide the cans unto the tailgate of the truck and then unto the stainless-steel rollers which conveyed the cans into the plant. After unloading Dad would drive to the west end of the plant, and we would wait for our sterilized, steaming cans with lids ajar to come out of end of the plant. We could always look for our farm No.#111 or else spot the medallion emblazed on the side of the can. with Herman R. Johnson and A. Vernon Johnson, RR#1 Clinton, Wis. on it.

Many days while we were impatiently waiting for the return of the cans, we could watch a steam engine locomotive pass by the factory on the nearby tracks.

When we got old enough to handle important responsibility, we were allowed to go to the side entrance, enter the steamy, humid plant and procure ice cream and butter, depending on Mother’s needs. Bowman sold large containers of ice cream, but we always got a half gallon to take home.

My brother, Duane remembers that the “creamy vanilla ice cream was almost as yellow as the butter used for baking.” Oh, so good!

On most mornings one would find us driving over to Main Street Clinton. Dad might go to an implement dealer, to the bank, or to Boden’s drug store. One place that we usually visited was Chick’s Café. They served up single dipped ice cream cones for 5 cents a dip. We enjoyed every melting bite on the way home from town.

In 1961 the Bowman family leased the closed plant facility to the DeLong family feed business, and it served as a warehouse for feed distribution. Later the DeLong Company bought the empty plant, and It now serves as the fertilizer manufacturing center for this prospering family, grain and agriculture business.

The demographics of Rock County continue to change, and dairies are few and far between; however, there are still bulk tanker trucks on the road, and some families continue to milk large numbers of cows.

One constant throughout the years is our families’ continued love of ice cream. Vanilla is delicious, but personally I will take butter pecan if given a choice.