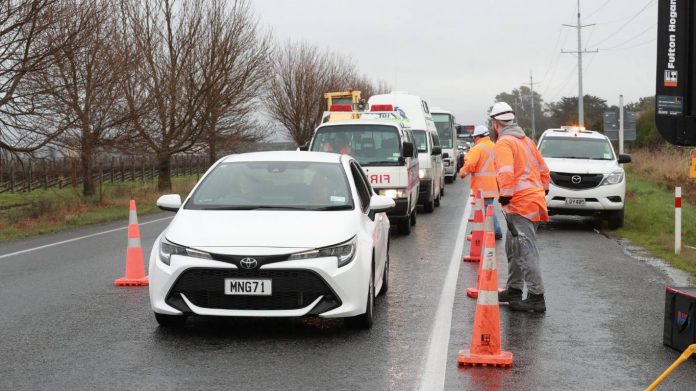 Traffic queues at a cordon north of a fatal crash on State Highway 1, south of Blenheim. One lane has since reopened.

One person is dead and another is fighting for their life after a head-on crash south of Blenheim, Marlborough.

One person was killed in the crash, while a second person was critically injured, a police spokeswoman said.

That person was flown to Nelson Hospital by rescue helicopter, a St John spokesman confirmed, which arrived at the crash scene from Nelson about 7.40am.

Two ambulances from Blenheim were also there assessing a third patient with serious injuries, who was taken to Wairau Hospital, he said.

Traffic was able to pass the crash site with one lane open under traffic management by 10.50am.

The road had been completely blocked for more than three hours while the serious crash unit assessed the scene, with a cordon turning traffic back at the truck stop at Riverlands.

A police spokeswoman said detours on Redwood Pass Rd and Taylor Pass Rd had not gone ahead as planned. The rural shingle roads were not suitable for trucks or campervans and the driving conditions were poor. Traffic was being turned back to Blenheim.

The ferry companies had been advised of the delays, police said.

Interislander executive general manager Walter Rushbrook said they were aware of the situation and liasing with police over how ferry travellers could be affected.

“If necessary we will adjust our sailing times, and if people miss their sailings due to the accident we will seek to accommodate them on alternative sailings,” Rushbrook said.

A police spokeswoman said there was another, minor crash 10 minutes before the fatal collision, just south of the scene. A vehicle hit a bank about 6.40am and ended up partially blocking the southbound lane, she said.

The fatal crash is not the only one on SH1 near Seddon in recent weeks.

A fortnight ago, Damian James Pollock, 27, from Ward was killed after his ute went off the road.

Emergency services were called to the single-vehicle crash on SH1, between Blind River Loop Rd and Tetley Brook Rd.

Florida man is filmed clinging to the hood of a semi...