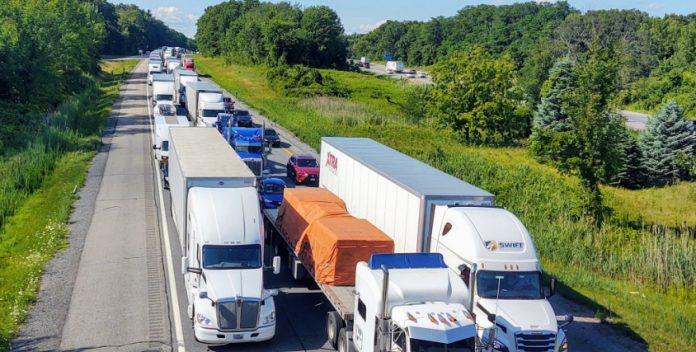 COLONIE – A Monday afternoon crash that injured a state trooper and backed up Northway traffic for miles was caused by a box truck driver on drugs, state police said Monday evening.

The trooper injured in the crash was taken to Albany Medical Center for treatment and was released, state police said. The driver of the vehicle that had been stopped was evaluated at the scene, troopers said.

State police identified the driver of the box truck as 52-year-old Terrence Hudson, of Queens. Troopers charged Hudson with driving while ability impaired by drugs and second-degree reckless endangerment, misdemeanors.

The crash happened at about 1:41 p.m. on the Northway southbound, south of the Twin Bridges, state police said. The trooper had just conducted the traffic stop.

The crash shut down southbound traffic and left vehicles backed up on the Northway for miles, up to Exit 8 and beyond as police investigated and cleared the scene.

Two lanes reopened by just after 5 p.m., and all lanes opened by 6 p.m.

Images from the state NY511 traffic camera at about 2:45 p.m. showed the box truck blocking the lanes.

A Penske box truck sideways Southbound on I-87 just below the Twin Bridges Monday afternoon. pic.twitter.com/mjbVvkLWJc

NY511 showed stopped traffic from the Twin Bridges north to Exit 8 before 3 p.m. Cars could be seen reversing direction on the Exit 8A onramp to get off the highway.

Traffic was being diverted off the Northway at Exit 8 and drivers were being asked to seek alternate routes.

VIDEO: Stopped traffic on I-87 Southbound lanes below and then above the Twin Bridges with people outside of their vehicles during the standstill Monday afternoon. pic.twitter.com/k6K53N41PH

Beyond that, a wall of stopped cars and trucks could be seen from the crash scene to the Twin Bridges, some drivers waiting out the crash outside of their vehicles.

The closure near the Twin Bridges was also later followed by another crash, further north at Exit 9 that closed the southbound lanes for a time there.

That accident involved a tractor-trailer and resulted in minor injuries, state police said. One lane reopened there just before 6 p.m. All lanes finally reopened after that crash after 8:30 p.m.

RCMP have found the owner of a truck abandoned at Galena...