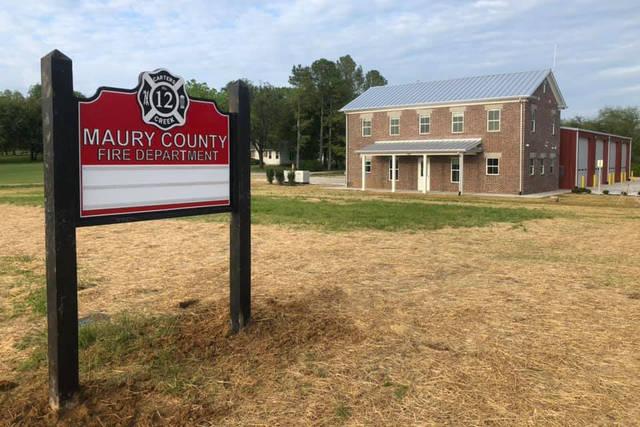 Less than a year after being approved by county commissioners, the Maury County Fire Department’s Station 12 is up and running and continues to see additional features thanks to supportive members of the community.

The 7,232-square-foot fire hall located at 1180 Carters Creek Pike was first approved by the commission in August 2019. With funding for the project set aside in the county’s budget, the commission unanimously approved the $966,000 construction contract with Paul Varney Construction.

The project’s completion marks the end of a three-year effort to provide additional protection to northern Maury County.

The project came to fruition through the local contractors, builders and designers who donated their own time and manpower to construct the new fire house with little cost to taxpayers.

The station’s most recent addition is a flagpole donated by Joe and Betsy Fiorelli. The local couple also financed the construction of a brick walkway that leads to the pole that rises above the two-story fire hall.

The building received its certificate of occupancy in April, and has hosted several training exercises and meetings since then.

“I think it is going to be great for the community,” said Tim Turner, the captain of the new station. “Our concern has always been having water on that side of town. It is really going to help if we have something major that way. It certainly is a need in that area.”

The station will also be home to a new tanker truck and a fire engine. The engine is expected to arrive in the coming weeks and the tanker should be at the station by December.

“We want to start serving that community as quickly as we can,” said Eric Hileman, the chief of the volunteer fire service during a commission meeting . “It will be a huge advantage to the community.”

Both vehicles were built to the department’s specifications and the strain on supply chains and manufacturing facilities due to the coronavirus has delayed the arrival of the two vehicles.

“It is going to be good for the community as a whole,” Turner continued. “The station was really done right and it was well built.”

Peder Jensen, the district chief for the new station, said architectural and engineering work was donated toward the project, saving the county an estimated $500,000.

Paul Varney Construction provided building services for the project and local firms 906 Studio Architects, WES Engineering & Surveyors and Genesis Engineering all volunteered professional services to design the station at no cost to the community.

“They are strong supporters of our local fire department,” Jensen said.

The new station will provide added coverage to one of the county’s fast-developing regions, the Nashville Highway corridor between Santa Fe and Spring Hill.

“To have this station to serve those nearby neighborhoods; this is just going to be a great opportunity,” Jensen said. “We will have volunteers who will be able to spend the night there and truly serve the community. Now we are going to be able to provide adequate coverage for these areas. This provides us with a way to get to the area much quicker.”

“The community is always there for us,” Jensen said.

Members of the surrounding community also helped the department furnish the facility, reducing the project’s budget.

“We have had immense support from people in the community,” Jensen said. “We just had to ask and people turned out. They want to be involved and show their support. The community is always there for us, helping those in public service. Thank you to all the donors, you helped us build this station.”

The road to completion

In 2017, the county’s building committee assigned now former Commission Chairman Michael Fulbright and Mayor Charlie Norman along with Fire Chief Hileman to form a special initiative to begin the search for properties to build the new station.

A retired firefighter, Norman then said the county will make sure the new station will overlap within a five mile radius with other neighboring stations to ensure the county’s citizens continue to see a discount on their home insurance.

In the months leading up to the August approval, a group of Maury County Commissioners continued to voice their support for the new station as the county continues to see new homes and businesses built.

As work on the new station continues, the local department is searching for a new contingent of volunteers.

A new recruit class will launch in January offering opportunities for firefighters and those seeking to fulfill support roles.

Maury County Fire Department has more than 200 volunteers and continues to search for more.

Excluding the build, the department currently operates 11 stations spread across the county’s more than 600 square miles.

In 1980, a rural fire branch of the Civil Defense was established on the heels of the purchase of firefighting equipment with a grant from the Tennessee Valley Authority.

In 2005, County Mayor Jim Bailey and his office created the Maury County Fire Department by consolidating independent departments across the county under a single board of directors.

Man charged with murder, accused of running over his ex-wife with...