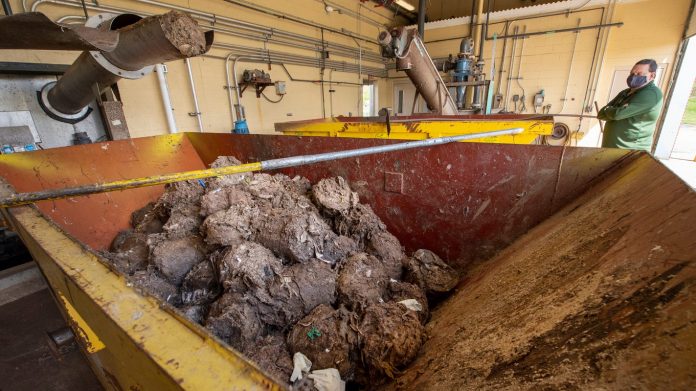 See what happens when a disinfectant wipe and other non-flushable items enter the York Wastewater Treatment Plant.

As the stay-at-home order rolled across Pennsylvania on April 1, the pattern of waste disposal also changed, migrating from a combination of commercial and residential to mostly residential.

With the sudden change came new challenges for those on the receiving end of the waste stream.

More and more, disinfectant wipes, diapers and other foreign objects not meant for sewer systems started flowing through the pipes. Trouble also has increased in the trash hauling business.

Frankie Campagne, general manager of the York Wastewater Treatment Plant, recently stood above a tank, looking down at a gray turbulent soup of sewage.

“There’s a rag,” he said, pointing to a swirling white patch. And then another, and another twisting textile rectangle quickly spun past as the constant stream of unwanted objects headed into a dark tunnel.

The plant manager describes how these dish rags, disinfectant wipes and other objects, which don’t break down while traveling in the 100 miles of collection piping, are blocked from entering the vulnerable parts of the plant.

Material retrieved from the wastewater is pushed through a screw conveyor and into a collection system at the York Wastewater Treatment Plant. Frankie Campagne, general manager of the facility, in the background, says as the wipes shred they get mixed up with fats, oils, grease, rags, baby diapers – and even teddy bears. (Photo: Paul Kuehnel, York Daily Record)

Two tall silver boxes nearby hold redundant bar screening systems that are the first and last line of defense separating these floating menaces from the plant before it can ruin expensive pumps or clog piping.

Campagne is in charge of moving 10 million gallons of sewage a day from eight municipalities through a treatment process that eventually moves that water into the Codorus Creek, meeting designated environmental criteria.

The plant in Manchester Township is nestled between Route 30 and the Codorus. It’s an evolution of best practices treating wastewater at the same location since 1915, according to Campagne. The earliest buildings still exist along with modern construction and technology.

The industrial setting is in contrast to the green, springtime creek bank of the Codorus Creek. The Heritage Rail Trail County Park runs along the opposite bank, and bald eagles fly across the creek. Pink wildflowers bloom in the grass around a concrete bunker that anchors a 6-foot-diameter pipe of fast flowing, murky, gray water.

Treated wastewater tumbles down to the Codorus Creek after it’s been treated at the York Wastewater Treatment Plant. A plant operator walks down to take a sample to bring back to the lab. (Photo: Paul Kuehnel, York Daily Record)

As for the bar screeners, they are an important part of the operation. They screen with holes, about an inch in diameter, trapping what can’t pass them in the wastewater. A rake, which looks more like a long metal comb with short wide teeth, swipes up past the screen and pulls the material up into a chute using an automated process.

Two bar screeners, in the silver boxes at top, offer redundancy if one breaks down at the York Wastewater Treatment Plant. Wastewater is screened before entering the plant to remove items like disinfectant wipes that could ruin pumps and clog pipes. (Photo: Paul Kuehnel, York Daily Record)

Exiting from the screener, a screw conveyor uses a stainless steel pipe with screw paddles inside to transport the waste into a building with large dumpsters. Inside the tube, the mash, Campagne describes as “fats, oils, grease, rags, baby diapers, (even) teddy bears…,” moves toward a small building where it is stored and hauled away.

Huge, brown, partially dried feces randomly drops from a chute and piles up in a bin the size of a pickup truck, before heading for waste disposal. The intense smells coming from this bin tells a messy story of a thousand lives.

Campagne points out that even before affecting the plant, these materials bond with oils in the water and can turn into large blobs, clogging sewer lines where they exit homes into the main line.

This can indirectly impact homeowners who are not flushing these items, when sewage backs up into their home. The fat globs in sewer lines are not selective on where they form and clog.

On April 29, The Pennsylvania Department of Environmental Protection issued a warning about non-flushable items. “Tissues, paper towels, and single-use wipes, including cleansing and diaper wipes cannot be safely flushed even if they are labeled as flushable or biodegradable.” The DEP advised only toilet paper and human waste should be flushed.

More: How coronavirus affected adoptions at the York County SPCA

More: Coronavirus wedding: A candy ring was all there was to tie the knot, then a surprise

More: ‘Corona Don’t Mean What It Used To’: local music veteran Rob Lane reaches out with a song

“As the industry and commerce have decreased their operations, as people stay home more often, we see more domestic use,” Campagne said.

The random junk floating into the plant has increased during the stay-at-home order because commercial users are regulated as to what they can discharge into the sewer lines. Residential customers are on the honor system to control what they flush, he said.

“The community needs to help us out… a lot of times people feel, well, I flush it down the toilet, it’s gone, it’s not my headache, but it does become a headache for other areas of the community…It affects the homeowner as well as the plant performance,” Campagne said.

And it’s not just sewage problems on the increase during the stay-at-home period.

Recently, in Lancaster County’s Paradise Township, the load inside a Penn Waste Inc. garbage truck caught fire, and the operator, following protocol, dropped the flaming mass on a street.

The collection company responded to three such fires in less than a month, caused by homeowners disposing of pool chemicals, rechargeable batteries and hot ashes, according to Amanda Moley, marketing supervisor for Penn Waste.

The company posted a picture of a truck on its Facebook page on April 30 with its ejected flaming load caused by something left in the trash for pickup.

The text of the post reads, “We’re going to say this a little louder so the people in the back can hear – PLEASE STOP PLACING HAZARDOUS WASTE IN YOUR CURBSIDE TRASH & RECYCLING.”

It can cost up to $250,000 to replace an entire truck, and “most importantly, our employees are priceless,” Moley said. The recent trash fires didn’t result in any injuries.

According to Moley, the company, with 185,000 residential customers, saw “a 20% increase in trash volumes since the pandemic hit, which directly correlates to more people being at home, eating at home, doing yard work, and shopping online.”

She said that “the amount of cardboard we’re seeing (going to recycling) is similar to what we typically see around the holidays.”

This is a sample of treated water at the York Wastewater Treatment Plant from just before it’s discharged into the Codorus Creek, in the background. The plant processes 10 million gallons a day from eight municipalities. (Photo: Paul Kuehnel, York Daily Record)

Back at the wastewater treatment plant, the essential workforce is continuing operations. As far as dealing with the coronavirus, Campagne said, “It’s no different than dealing with all the different things that come through the plant, whether it’s hepatitis, viruses…we were ready for it.”

He added, “As they say in Hollywood, the show must go on.”