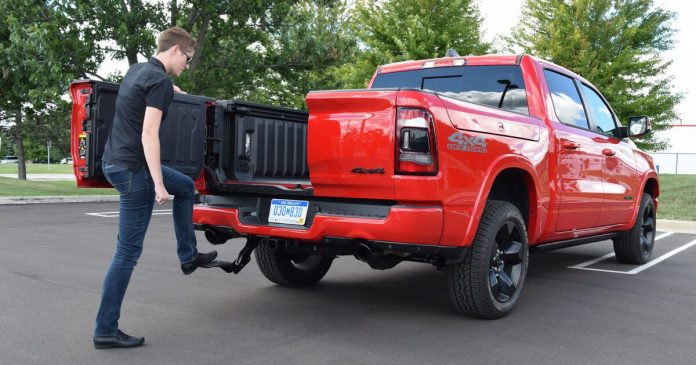 Truck tailgates have pretty much been the same for a century: flat chunks of metal closing off a pickup’s business end. But in the last couple of years we’ve seen some amazing innovation in this area. GMC introduced its flipping and folding MultiPro tailgate, while Ram now offers the clever Multifunction tailgate, which is split vertically like a pair of barn doors to make it easier to access the bed. Further simplifying things, on Thursday, Mopar, FCA’s parts and accessories division, announced a new add-on that should make it easier for customers to work and play.

The aptly named retractable center-mounted bed step is designed to work in conjunction with the Multifunction tailgate, to give customers a real “leg up” over the competition. It mounts neatly under a Ram 1500’s bumper where it’s out of the way, so it shouldn’t get snagged on rocks or debris while off-roading. When you need to access the cargo box, this step pops down with the flick of a foot. It’s made of aluminum and e-coated a fetching black color, so it should be both durable and light in weight. But don’t think it will fold under pressure — the step is rated to support up to 350 pounds.

Mopar offers more than 600 accessories for Ram trucks, everything from retractable bed steps that work on trucks not fitted with a Multifunction tailgate to cat-back exhaust systems, running boards, interior upgrades, suspension kits and much more. This new retractable center-mounted bed step, part No. 82216265AB, should make it much easier to work and play with a Ram 1500 pickup, all without breaking a leg, or your budget for that matter. The advertised price for this add-on is $395.

Climb in the driver’s seat for the latest car news and reviews, delivered to your inbox twice weekly.

Gritty will relieve boredom with fire-truck parade for Flyers fans in...